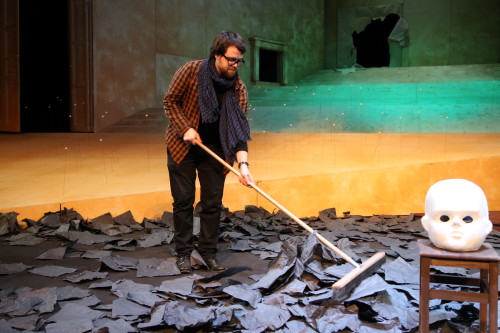 An Evening at the Theatre with Jane Eyre in Bratislava

Jane Eyre, the classic by Charlotte Brontë, is currently on show at the Slovak National Theatre in Bratislava. Directed by Marián Amsler, the production is praised among other things for its great scenery involving a huge amount of paper. Our correspondents Mária Danišová and Katarina Hendrichovska were at the premiere where they met stage designer Juraj Kucharek responsible for the scenery. Jane Eyre was Charlotte Brontë’s first published novel. It tells the story of the eponymous character, who after a difficult childhood, takes a job as a governess and falls in love with her boss. Like the author, Jane is a passionate and strong woman, who values freedom and independence. The nearly sold-out production at the Slovak National Theatre proves, that although a classic of Gothic and Victorian literature, Jane Eyre is still relevant today.Invitation to the premiere of Jane Eyrová

We met Juraj Kucharek, the person responsible for the great stage design, which manages to strike a balance between nineteenth-century England and our modern times. We chatted with him about the production, his inspiration and his choice to literally put paper on the stage.

Can you briefly introduce yourself?
I was born just outside of Bratislava and now work not far from there in the beautiful vineyards of

Pezinok. I graduated from the Academy of Performing Arts in Bratislava. Since then, I have been working as a freelancer in the fields of stage design for TV and theatre.

What was your inspiration for the stage design of Jane Eyre?
The stage design for Jane Eyre comes mainly from the awesome dramatization by Anna Saavedra and Marian Amsler combined with the biography of Charlotte Brontë, particularly highlighting her time in an orphanage. That’s the reason for two disparate sets combined into one – the first is directly inspired by the novel, and the second by the real life of Charlotte Brontë, by her home in Haworth Parsonage where she lived with her sisters. Why did you choose to use paper as a vital part of the set design?
The main reason was that in Haworth Parsonage there was a lot of paper disappearing – the Bronte sisters used to buy so much paper and the owner of the shop didn’t understand why they needed it so much. They wrote, drew and painted for most of their days. But they did not have as much as they needed so they reused the paper by flipping it 90 degrees and wrote across the original text. Which is your favorite character in Jane Eyre?
Of course Jane Eyre 🙂

What do you usually do before a premier? Is there any special ritual?
Before a premiere we usually buy souvenirs for the actors and people in the team to bring them luck!