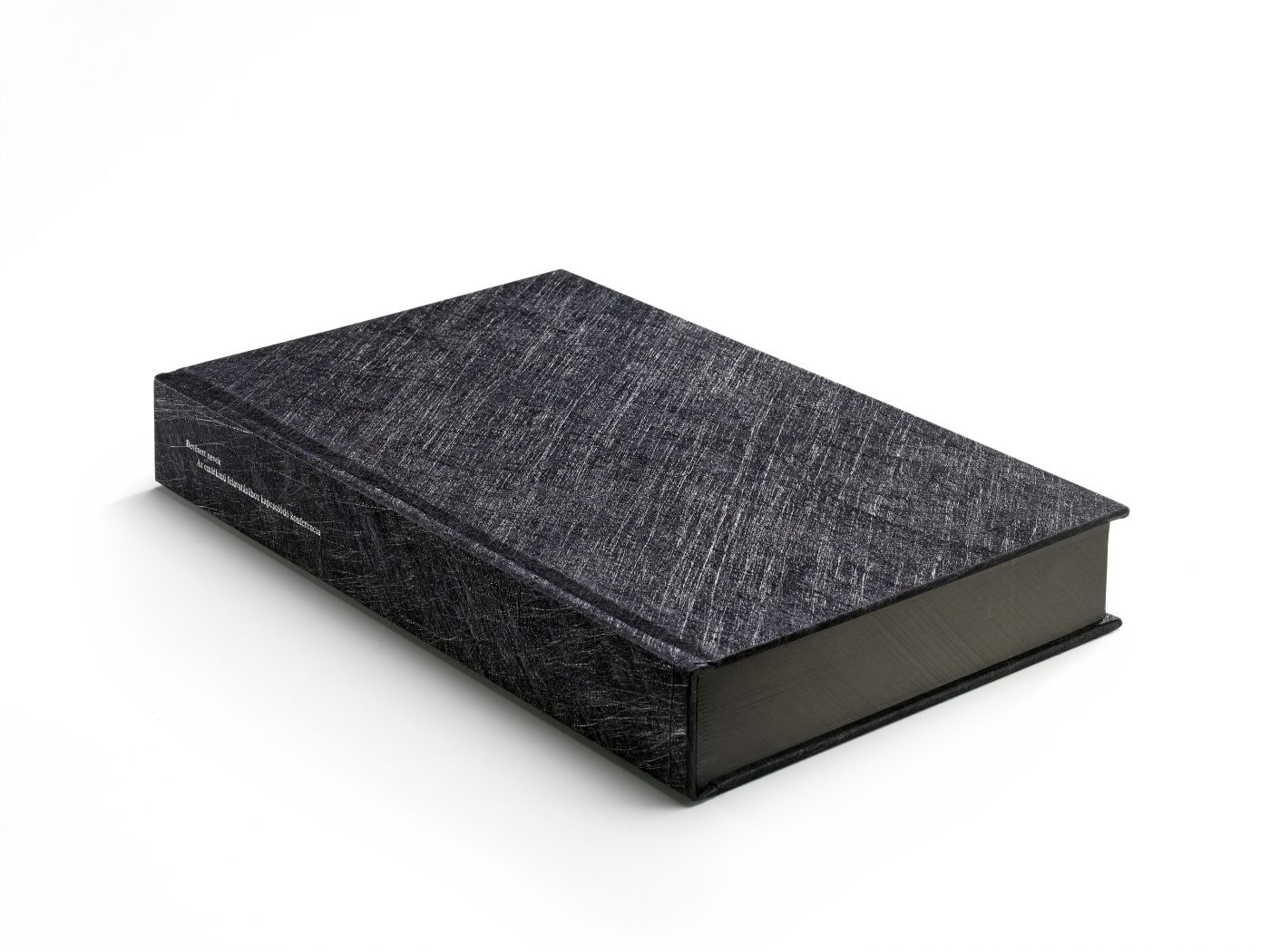 Carved Names, In Remembrance Of The 198

The colossal, Carved Names double volume was created in remembrance of the inauguration of the monument Names in Mortar Joints, set in the Trefort Garden on the campus of the Eötvös Loránd University’s Faculty of Humanities in Budapest in memory of the 198 former lecturers and students who had died as a result of anti-Jewish laws during the Second World War.

The monument, which consists of the names of the staff and students lost engraved on a thin bronze strip surrounding the Trefort Garden, was designed by a group of architecture students who had won the competition run by ELTE and the Master Association of Architects. The scale of the monument is simultaneously enormous and almost impossibly tiny, it expresses the unique and dramatic loss in the university’s history, without pushing it in the focus of everyday life. 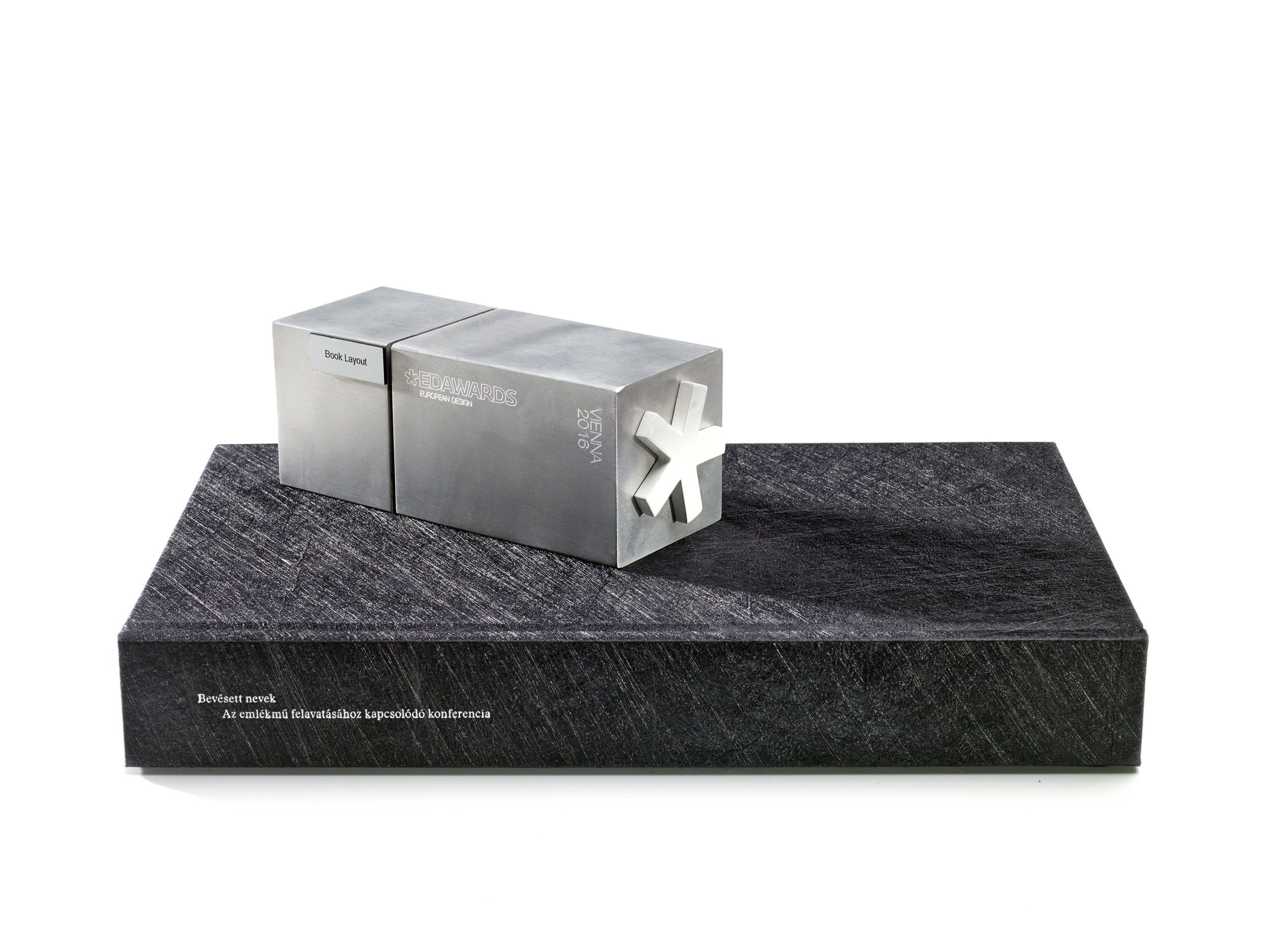 The art director for both volumes was Zalán Péter Salát, an awarded graphic designer and founder of the creative group Lead82. The pair of black and white volumes are bi-lingual, featuring content in both Hungarian and English. Each volume was produced in two versions: edge-painted and edge-chiseled, both equally unique and impressive.

The white volume was designed by Ákos Polgárdi, and presents the entries submitted to ELTE’s architectural competition for designing the monument, complete with project documentation and plans and illustrations, essays by ELTE students reflecting on the entries, interviews with the designers, a photo documentation of the realized monument, a type specimen of Trefort Grotesk, the monument’s bespoke typeface, as well as the names and basic biographical data of the victims. The engraved pure white cover made of Peywave cardboard has a unique, rugged, almost skin-like texture with a surprisingly silky feel, a piece of art on its own.

The black volume was designed by Zalán Péter Salát and Dániel Németh, junior designer of Lead82, and contains the proceedings of a conference held on the occasion of the monument’s inauguration. Containing purely text in a singular font style and size, echoing the typographic design of the monument Names in Mortar Joints. The Favini Twist Black cover with visible cotton threads is somber and heavy yet uncompromisingly elegant. Both books pages are printed on Munken Pure Rough paper, available at Europapier.

The large volumes with very minimal aesthetic have a statuesque presence to them, with the size and shape reminding of the brinks of the wall the monument is set on, while the unique hand-made covers bring an emotion of dignity and heaviness. Carved Names is no less than an art piece, a heavy lesson and a reminder to the current and future generations of mistakes made in the past. 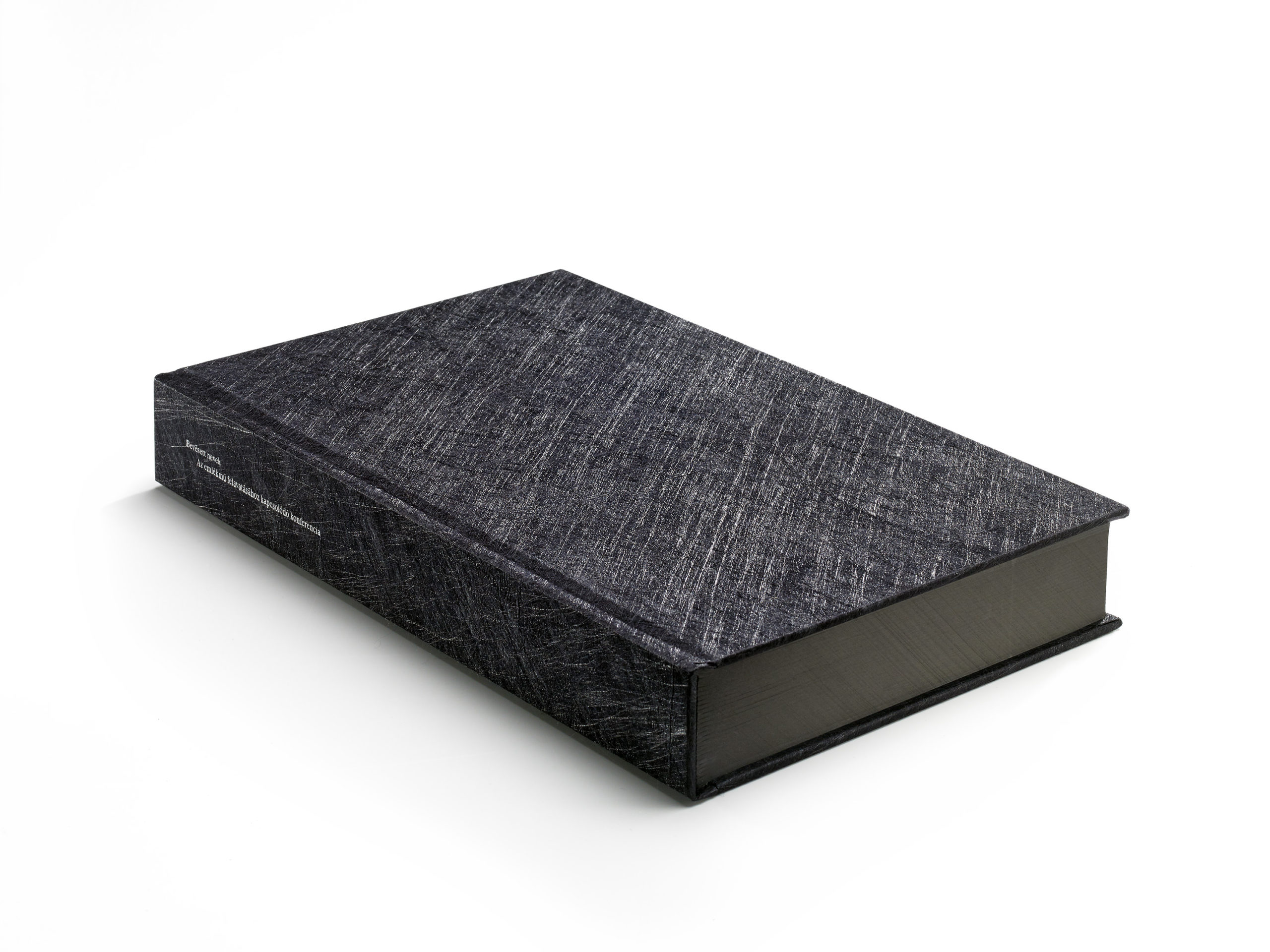 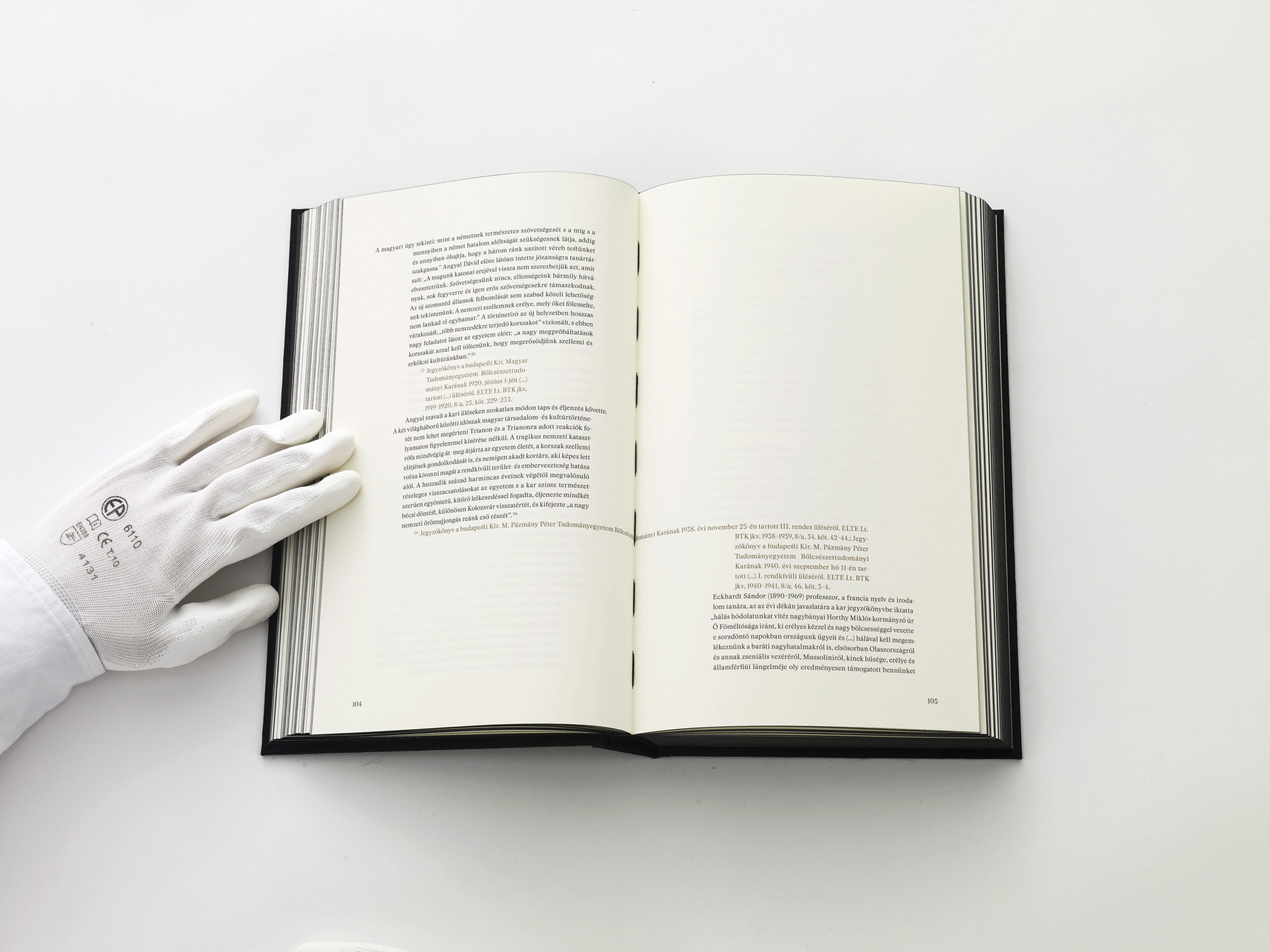 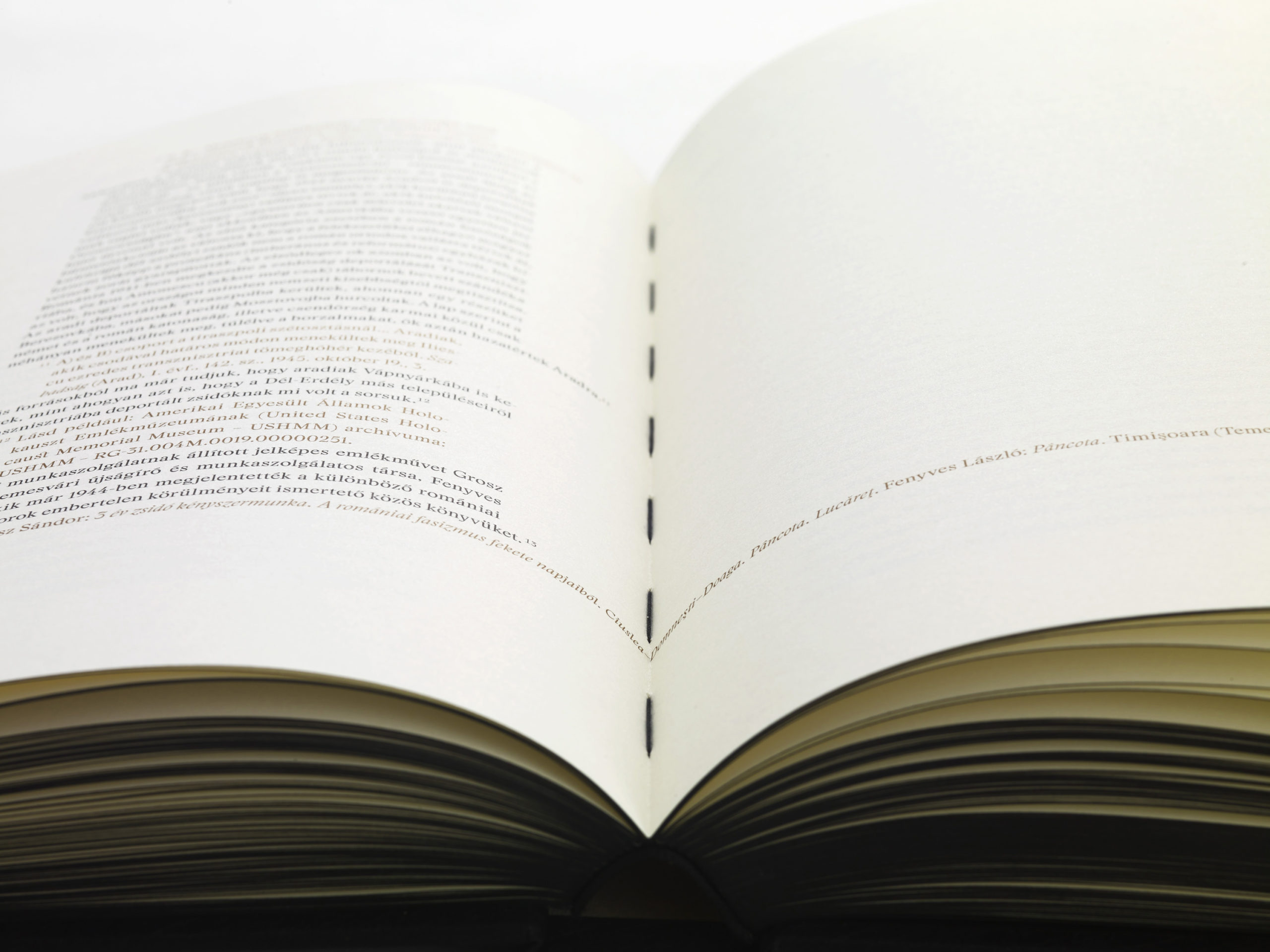 Carved Names has won multiple awards, including the Red Dot Award, the European Design Award, and the German Design Award which wrote; Angular and black like a briquette from the outside, with uncompromisingly pared-down typography on the inside. There’s no doubt about it – this book really is something special. By soberly listing the names of the victims page after page, it manages to provoke an emotional response from the reader. Purism of this kind requires a great deal of work, passion and care, but above all it also requires an absolute wealth of experience in typography and the craft of bookbinding, which explains why the result is so extraordinary. 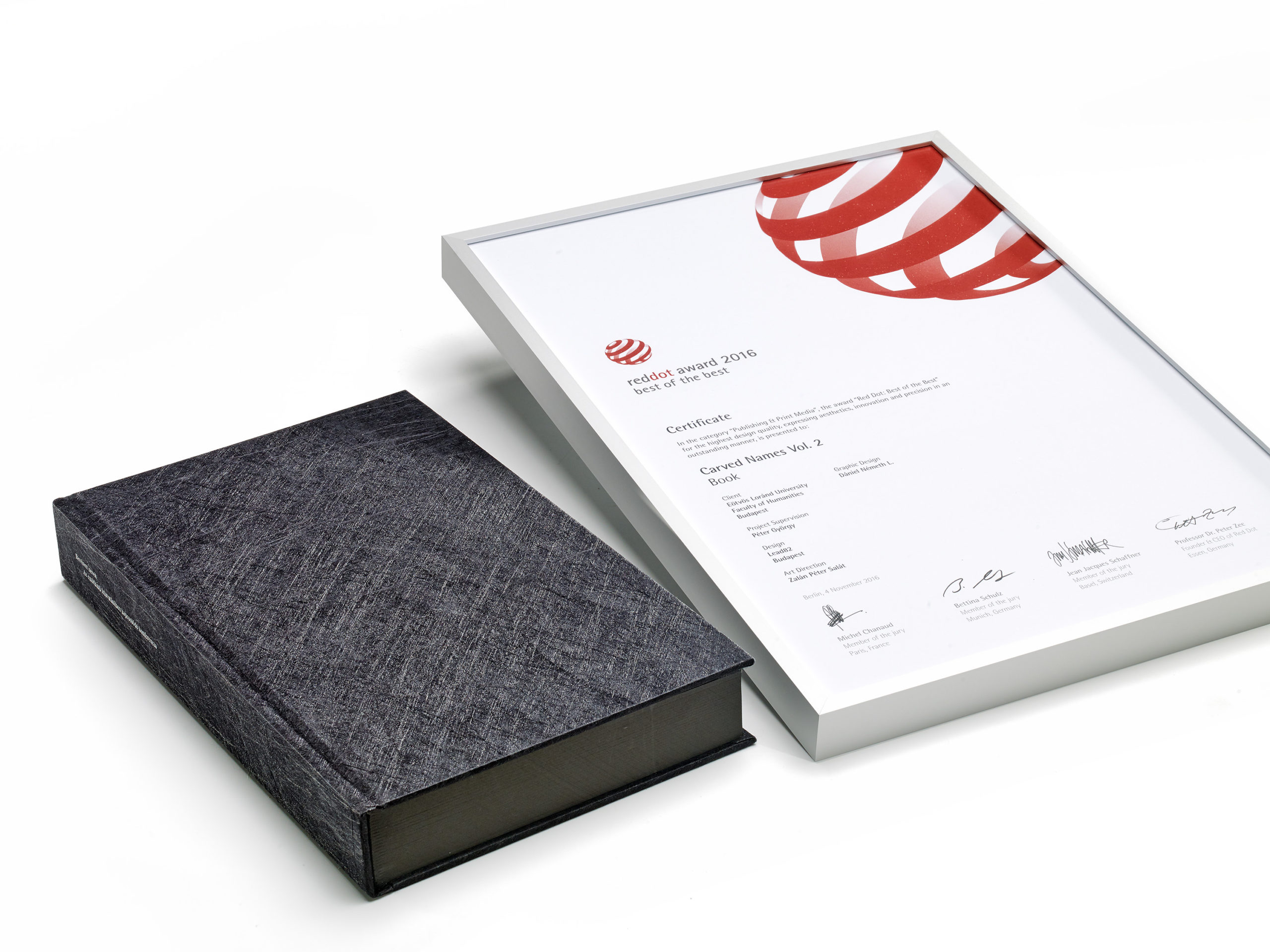 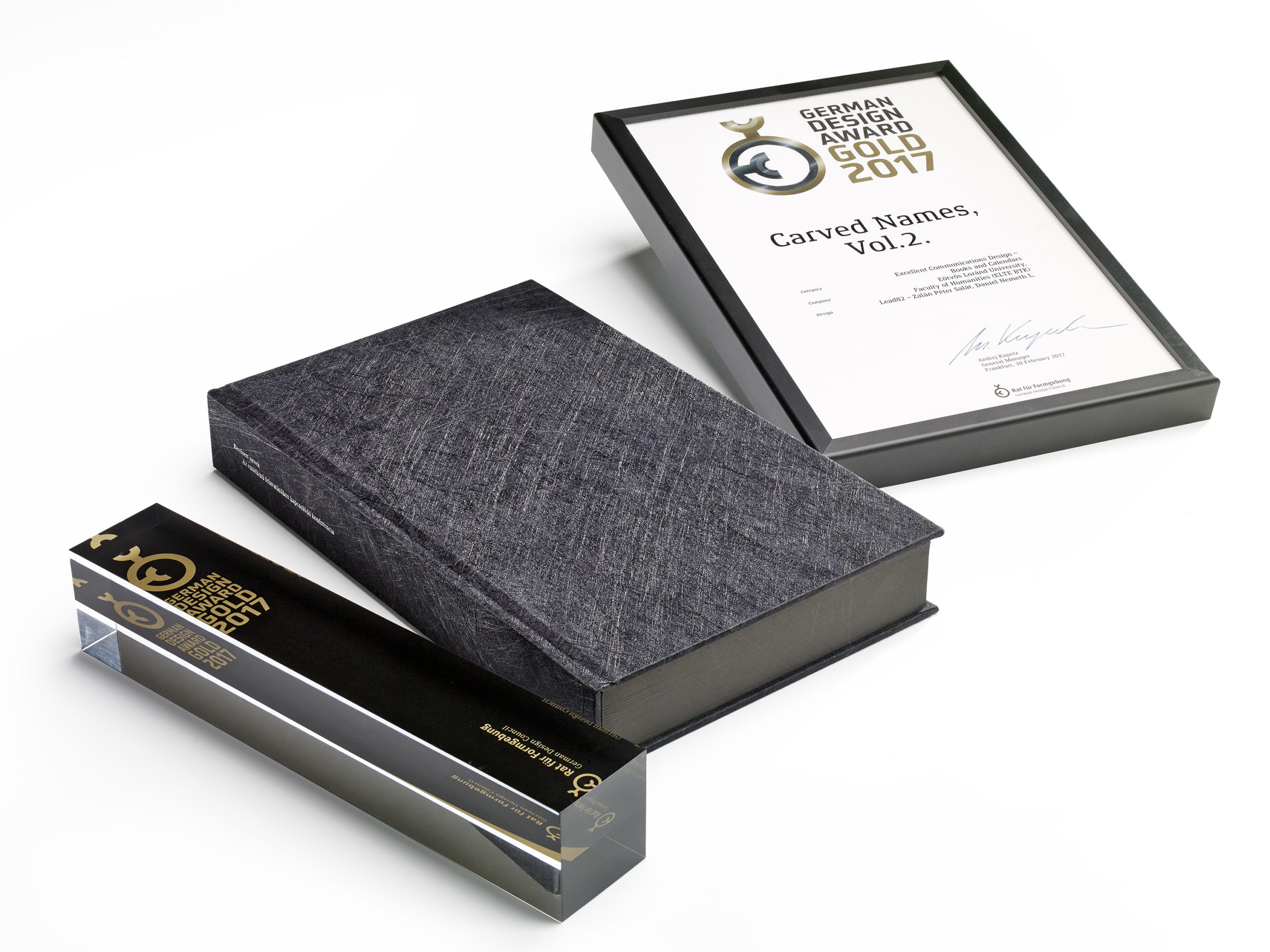 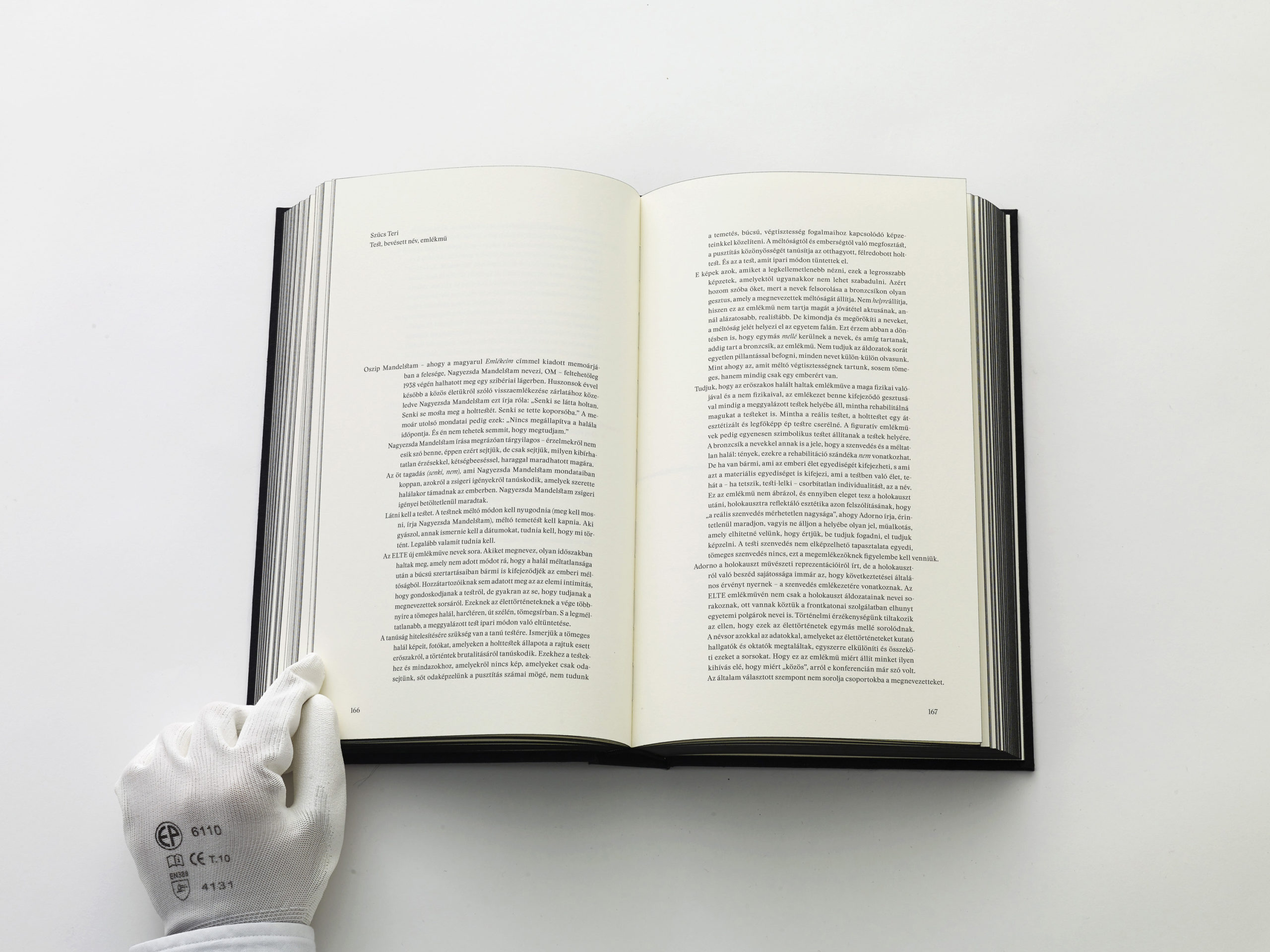 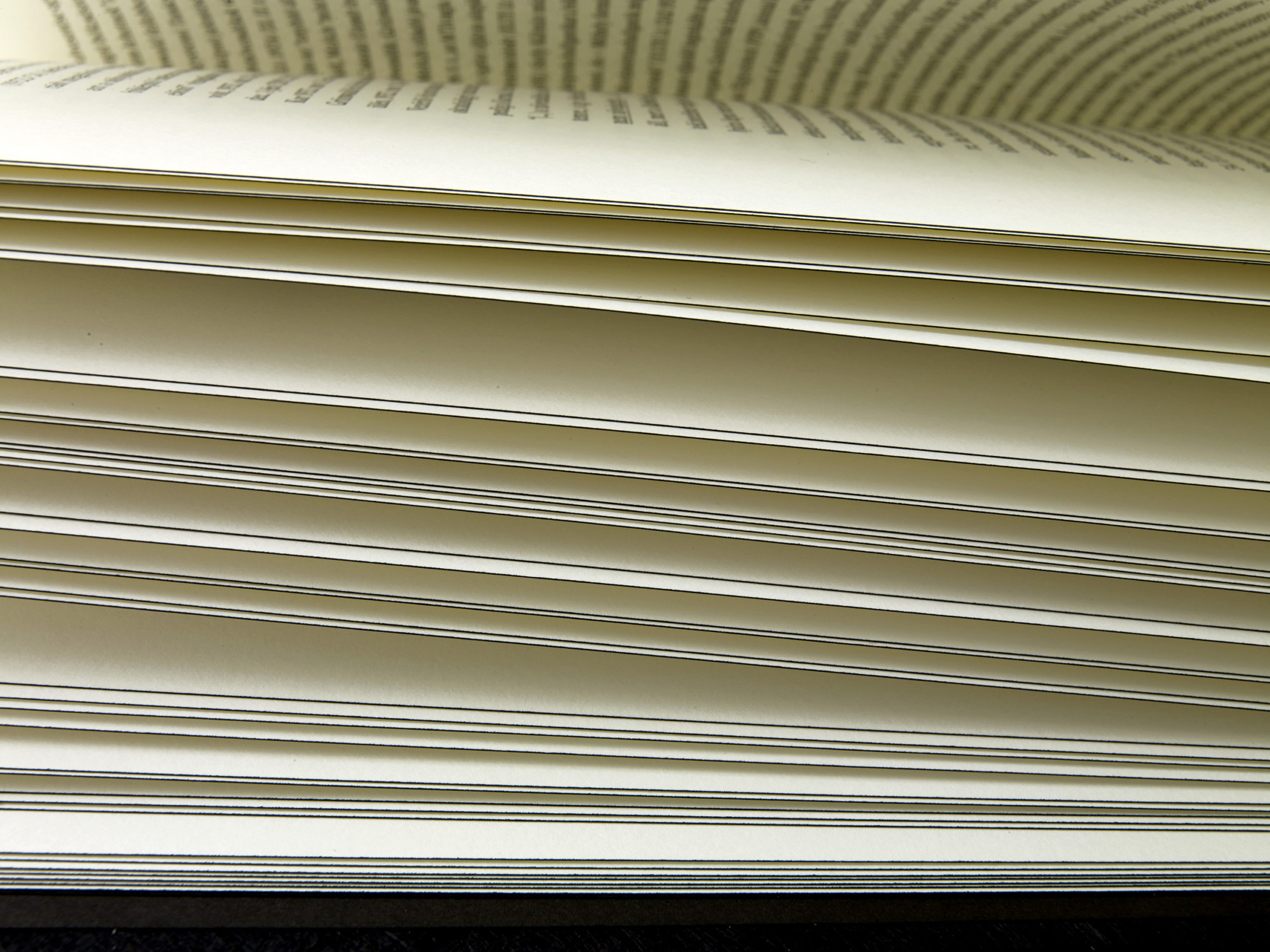 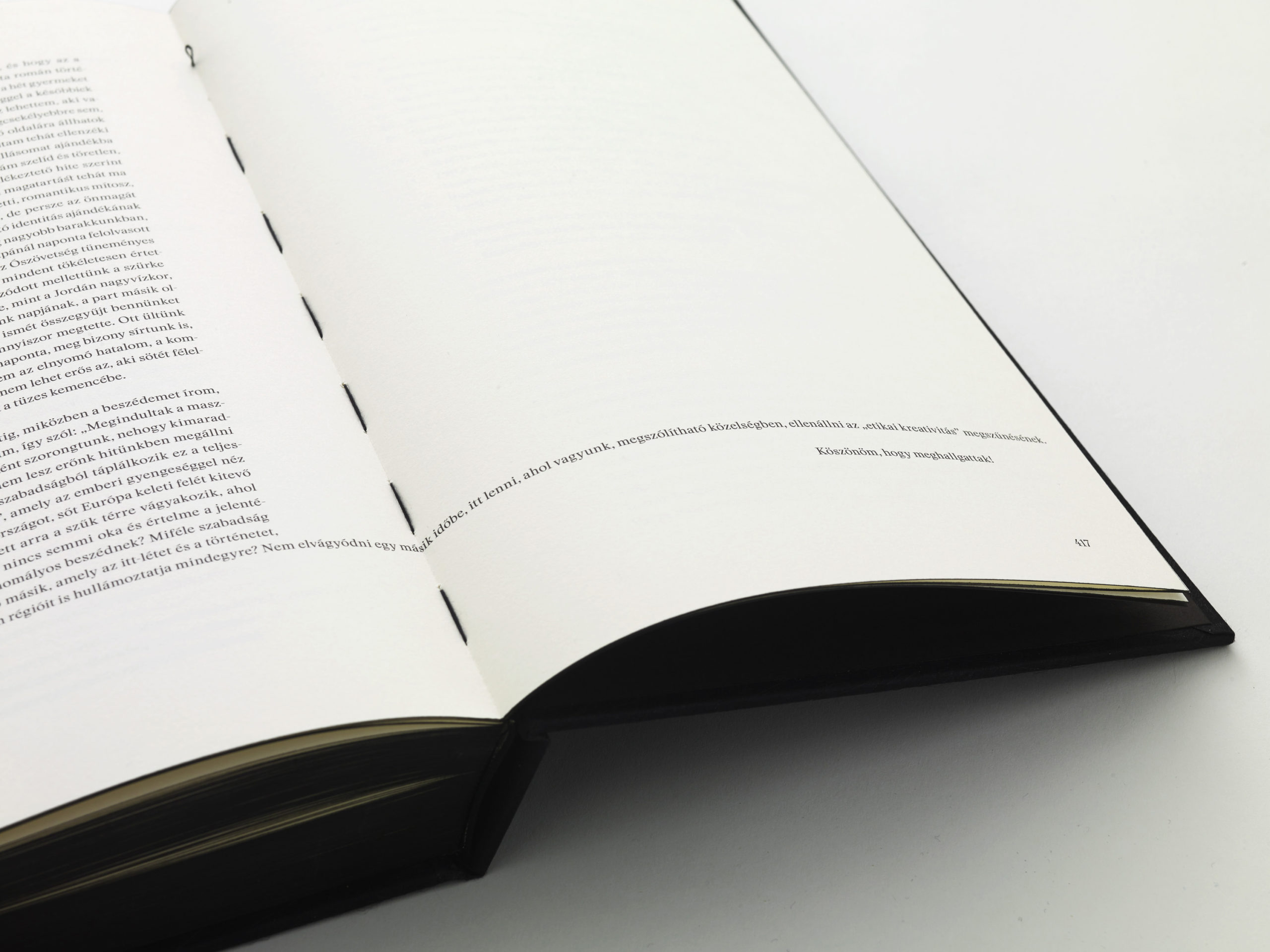