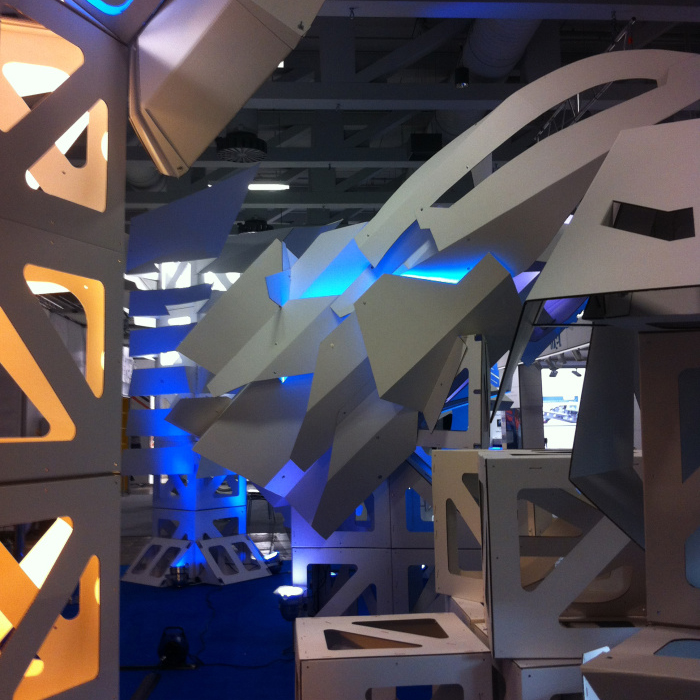 Paper Town is a Viennese Creative Studio which specializes in cardboard elements and architecture. They design everything from whimsical stage sets to multi-functioning furniture and grand sculptures to smaller Moroccan style light fixtures. In the name of green design, they give an alternative to plastic, metal, and wood, by betting on a more sustainable and cost-effective material – the cardboard.

Paper Town is made up of five talented individuals, all professionals in their own field. Philipp Blume, the architect, CEO and head designer of Paper Town, strongly believes in the possibilities cardboard has to offer. It’s all about the play with proportions, possibilities, and interpretations, he says. The team consisting of engineers and media designers, together come up with storytelling cardboard landscapes. Theatrical designs are Paper Town’s specialty. We’ve seen numerous designs gracing the stages of performers in the fields of music, theatre, and dance. Stage designs for numerous different artists and concerts, including Tania Saedi and Clara Blume & the Playbackdolls

Paper Town is also responsible for some of the coolest and environmentally friendly cardboard fair sets: the Cubes set at the Pioneer Festival in 2012 and the light-up Sculptures at the Innotrans Berlin Show are amazing, and really show how versatile cardboard can be as a material. It has the most suitable properties for fairs and festivals: low cost manufacturing, easy transport and assembly and the best part, it can be 100% recycled after use! And when well designed, it also looks cool and can be used in multiple different ways. The Pioneer festival in 2012 Some of the most interesting pieces Paper Town has made are the commissioned cardboard sculptures in social space. The life-size, 10-foot CAT train they did for the City Airport Train here in Vienna, for their 10-year anniversary, built and showcased at one of the biggest and central malls found in the city, Wien Mitte the Mall. It will be on show till the end of January, so make sure to catch a glimpse before the weekend. It’s located at the CAT lounge on the lower level of Wien Mitte. Even though Paper Town mainly concentrates on large scale installations, some of their small scale product design is very creative as well. Fully functioning and usable furniture made of cardboard has been the rising trend lately, and we are sure Paper Town’s designs are in for the competition. We wouldn’t mind having the x-Pod cardboard table (pictured below with Philipp Blume)! Check out more of Paper Town’s design on their webpage, and keep up with their latest endeavors through their facebook page. Who know what they will come up with next!