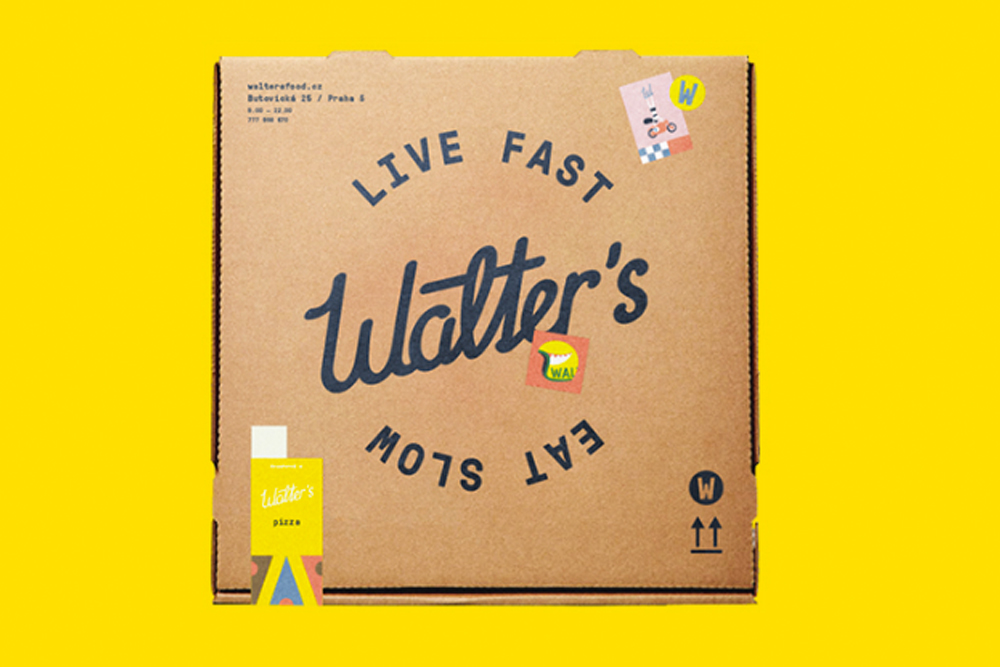 Petr Kudláček, a freelance graphic designer, art director and illustrator working under the name Lilkudley, was commissioned to create a visual identity for a new delivery bistro opening in Prague–Jinonice. The bistro was named Walter’s after the famous inventor and transportation design engineer Josef Walter, who, at the beginning of the 20th century, had a factory in the same district. Kudláček designed a new typeface for the restaurant’s logo inspired by the original Walter’s company’s historical logo. Each takeaway meal box is made unique with a set of illustrated stickers and handstamps portraying Walter’s famous inventions. The bright and comic-like color scheme together with geometric patterns and the classic kraft paper packaging create a fun, youthful look. Taking the few known facts of the late inventors’ life, Kudláček wrote an intriguing yet fictitious story which he then used as the basis for the visual identity.

Josef Walter as primarily known as an excellent design engineer but less as a menace to restaurateurs across the countries of the Austro-Hungarian Monarchy. He was being banned from most of the pubs and restaurants, particularly for his culinary fussiness and reckless manners. The story goes that this was the principal reason for him to set to inventing, in his Jinonice workshop, ever more perfect means of transport, which were then used to have his favorite delicacies delivered from all over the world.

All began quite innocently in the year of grace 1903 – with a bicycle dispatched to bring open sandwiches from the Old Town. With a moped send to deliver a schnitzel from Vienna. With a three-wheeler sent to bring fresh pasta from Milan. With a revolutionary water-cooled W1 dispatched to bring fresh sea fruits. Walters efforts culminated in 1935 when he constructed the cutting-edge engine NZ-60, which propelled airplanes delivering well-matured beef from across the Atlantic ocean.