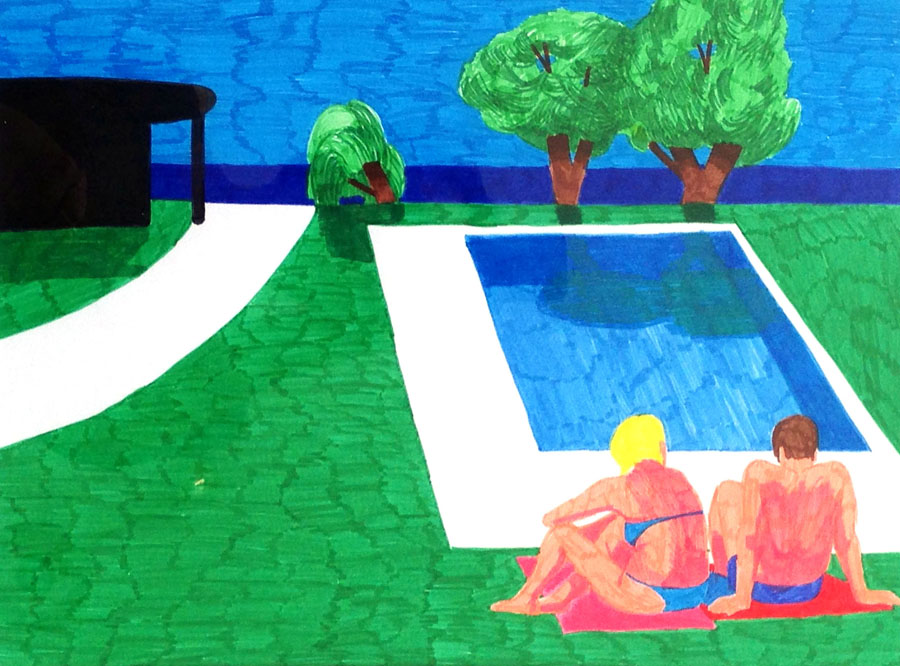 Most often than not – it’s the unusual that intrigues me the most, the odd one out that catches my attention. Ana Popescu’s Bathing Babes and their child like honesty made me wonder who’s the woman behind the illustration series Summer Chronicles. And most often than not – when you ask, you are answered. Popescu talks about her love for drawing, never ending pursue of perfection and fascination for the absurd. 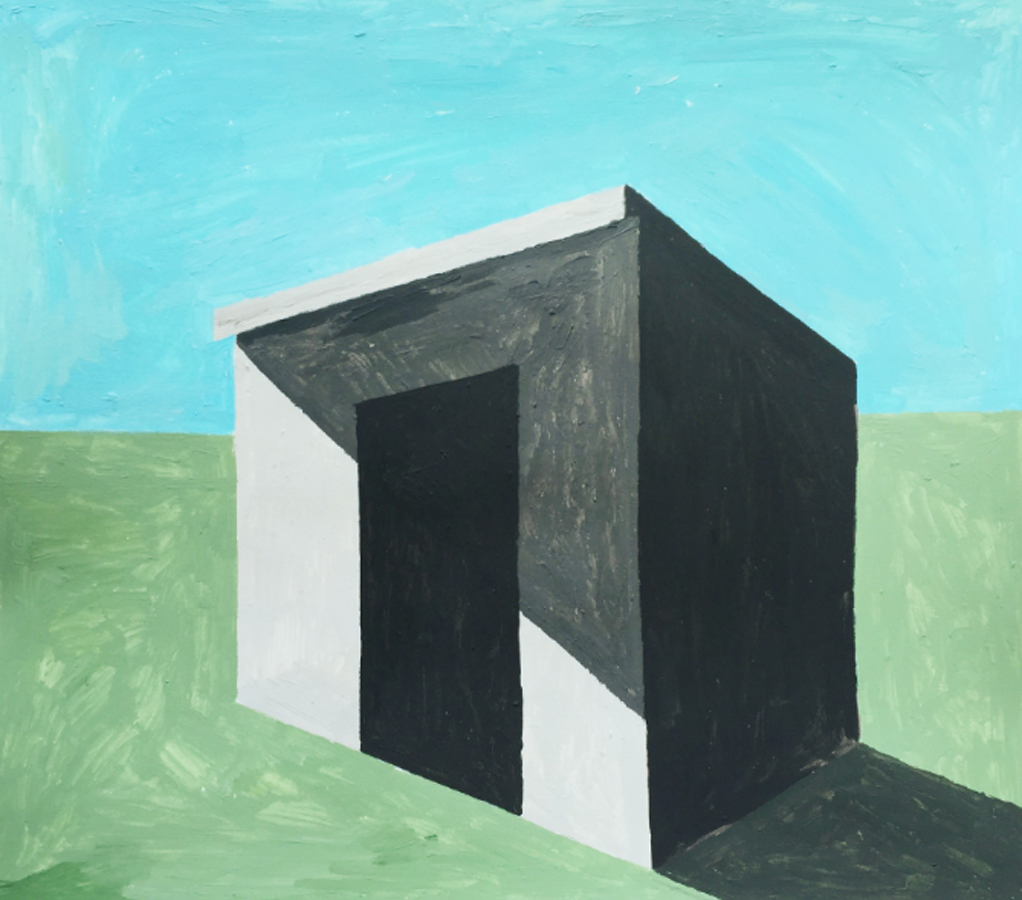 Design&Paper: To start things off, would you introduce yourself to our readers.

Ana Popescu: I’m Ana and I’m 28 years old. I was born in Romania but I grew up in France where my family still lives. I studied in Germany for 1,5 years before I came to Vienna to study printmaking and drawing at the University of Applied Arts in Vienna. After my diploma I worked in a bar for 2 years while trying slowly to establish myself, and now I’m finally (selbstständig). Since last year I’m represented by Caroline Seidler for commissioned illustration and I work on my own projects in my Atelier that I share with two friends in the 6th district of Vienna.

D&P: And how and why did you decide to pursue illustration as your career?

A.P.: Even if it sounds cliché I always loved to draw. I also grew up with comic books in France and have been fascinated by illustration. When I was 17 I decided to study printmaking and after my studies it kind of went in that direction. I still do other kinds of works that are bigger and less illustrative, because I need this balance.

D&P: What inspires you, what determines the subject of your work?

A.P.: I have different things that inspire me and that is combined in my work. I am fascinated by water and all the colour nuances it has, I could look at it for hours. Maybe that’s why my works are colourful and not black and white anymore. I also have a fascination for the absurd and for geometrical forms. Sometimes I combine all of that. Every work I do is some kind of continuation of the previous one, because there is always something that can be perfectioned. 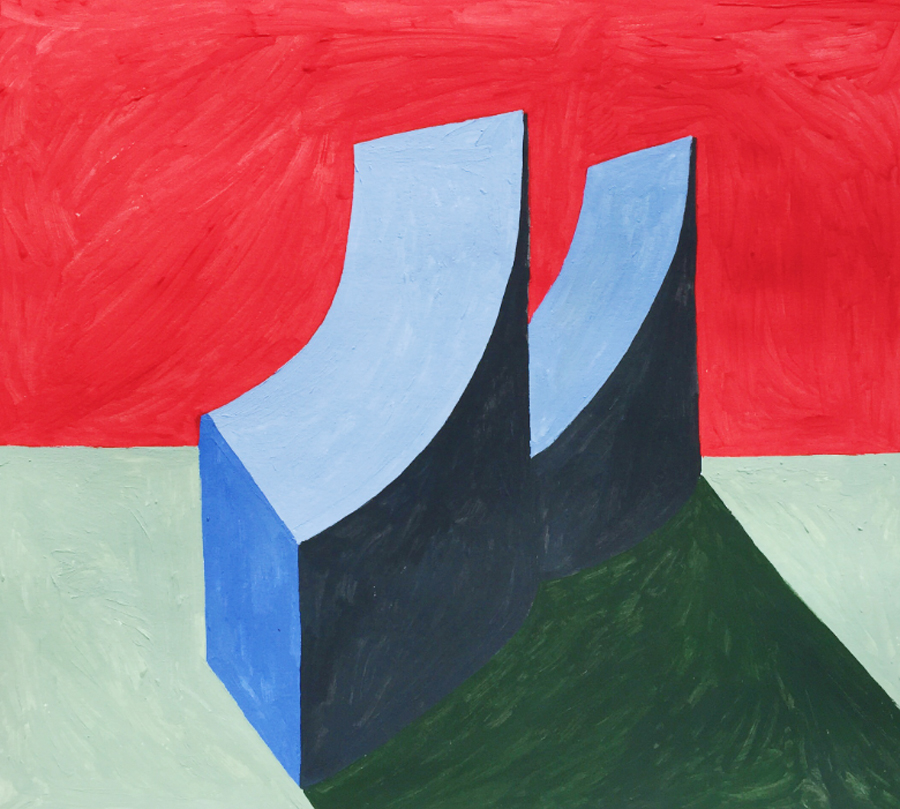 D&P: Would you walk us through your working process. Where, when and how do you work? The techniques and process you go through.

A.P.: I usually take the previous works and work on it more and always try new things out that come to me through research or from the will to improve what I already did. It is a process that goes through a longer time. Last year I did a big cut and left everything I used to do: big ink drawings, and started over with a sketchbook and felt tip pens. The sketchbook is always at the center of my work, and I don’t see it as a prestage but more as a work in itself. I often take photos of things that appeal to me aesthetically, like buildings, and scenes with people, and interesting light and shade scenes. I often take inspiration from these pictures when I imagine what I want to draw next. When I work on commissioned illustrations I work during the day at my shared Atelier and for personal works I need the privacy I have at home, where I have the space to put everything on the floor and just draw. That happens usually in the evening or at night.

Nearly everything I do is bound to a technique, for example Summer Chronicles happened because of the felt tip pens, somehow for me it was the natural theme to work on with these strong colours! The sea, people sunbathing, the southern feeling!

D&P: Your work seems to be based on personal experiences, how do you hope to connect with the viewer?

A.P.: Well yes, if you take my diploma project from 2013, I drew my whole apartment, it was somehow very direct and intimate. Summer chronicles is based on one of my favourite hobbies – going to the water in summer. I guess the last one is something nearly every Viennese likes do to and can relate to it. It has something of a childs memory, going to swim and eat french fries in the summer time. I actually don’t really think about the viewer when I work, it is something that I do more for myself and if it finds echo then I am really glad! 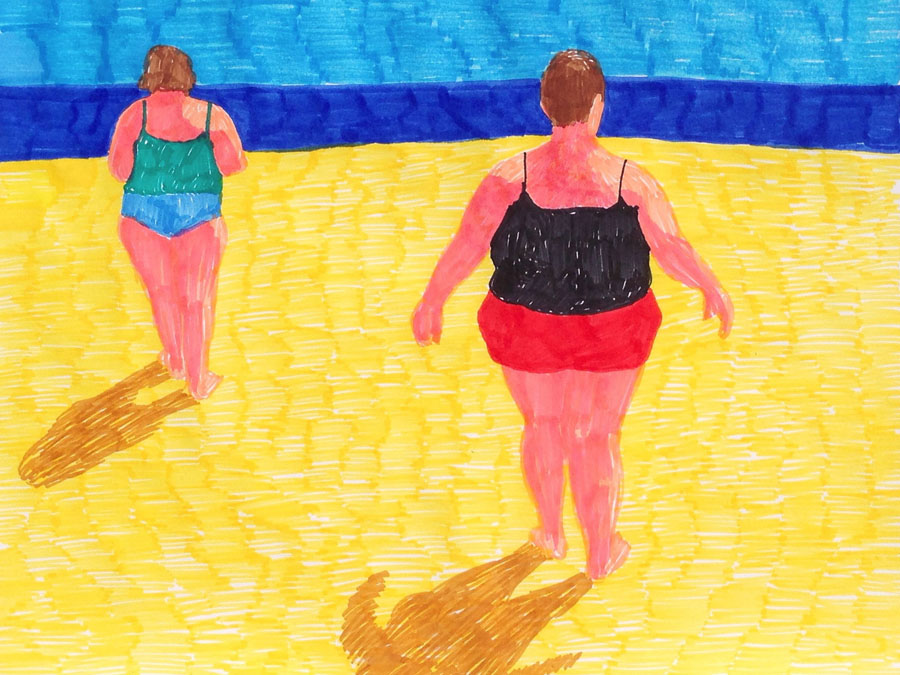 D&P:  I’m intrigued by your sketchy, almost child like illustration style in Summer Chronicles, it feels honest and fresh, without manipulation or polishing. How long do you work on a single illustration, and how did you develop your style?

A.P.: I am a very versatile person in my work and in my interests. I don’t think I have one style, which maybe is not such a good thing. I am interested by so many things at the same time that it’s hard just to do one. For me it was important to learn the classical way first, anatomy and all the techniques. That is the base of what I do. I love to try techniques and when I find something that I like, I concentrate on that for a time until it gets boring. By boring I mean that if I would draw one thing over and over again, because I might think I am good at it, it might get technically better over time but it would lose that fresh quality from the beginning. So when I have the feeling it is time to move on and find the courage to try new things, I go for it. I guess with that process I am where I am now.

I am more of “a sketcher”, and since I draw a lot, I draw in a very fast way. If I don’t like it, I don’t erase anything, I start a complete new picture. 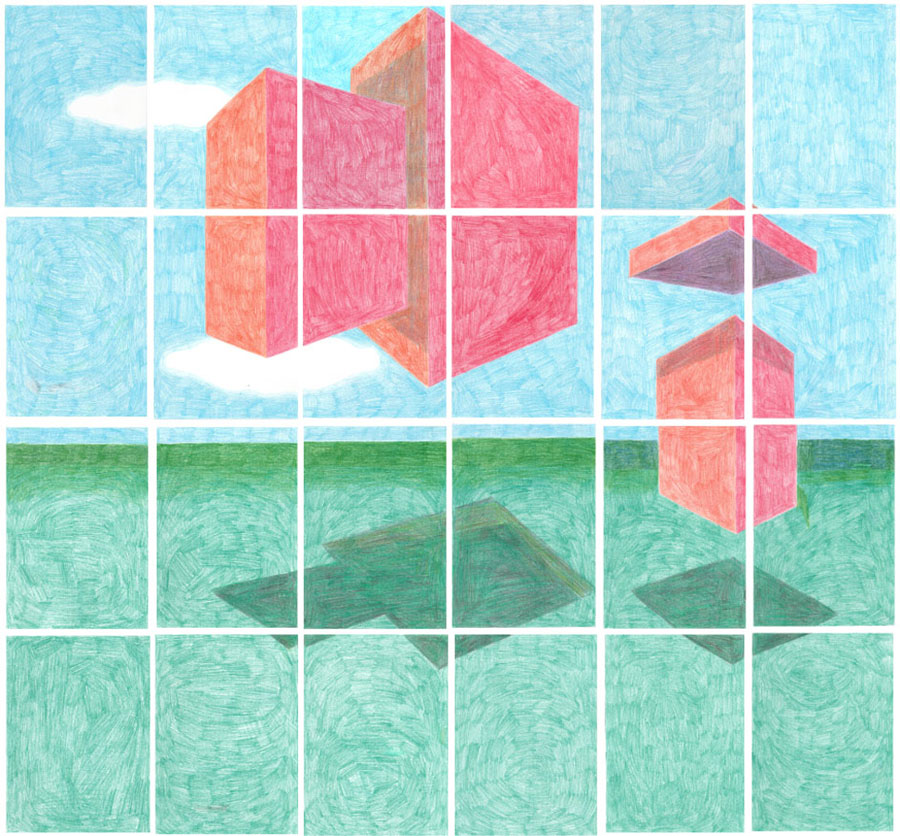 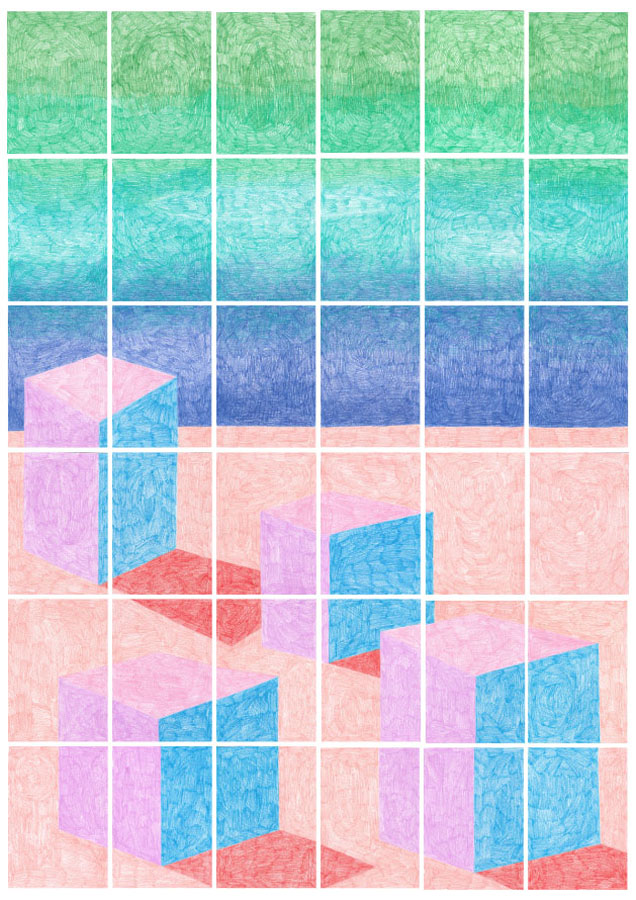 D&P: We featured your Babes series few weeks ago. It’s some of my favourite work from you, because it carries the message – all bodies are beautiful. Was that the idea behind it, or something that developed after?

A.P.: Well it started without any idea like everything else. Some people do research on one theme and they already now what they want to do. For me it starts usually with one spontaneous image, that inspires me for the rest of a series. For the sketches Babes, it started with a photo I saw of elderly ladies at the sea. Somehow I think elderly bodies carry much more informations and character than a young one, what we would call a “beautiful” one. Behind Babes is my fascination with the human diversity we can see all around us. We should observe the people surrounding us way more!

D&P: As a young creative living and working in Vienna, what is it like for people who want to work in art and illustration here?

A.P.: That is a very hard question since it is such an individual thing. It is hard to compare with others because everyone comes from different places and has different goals. It is of course not an easy path but I am optimistic (maybe too much) and still think that if you really work hard on something, you will achieve your goals. Since everything is so new, I will be able to tell more maybe in a year. For now I am very glad to be represented by Caroline Seidler for commissioned work! And I think Vienna has a big potential that is not being completely used yet, the scene is not so huge, which is I also believe is a good thing, because everyone can find his one place! 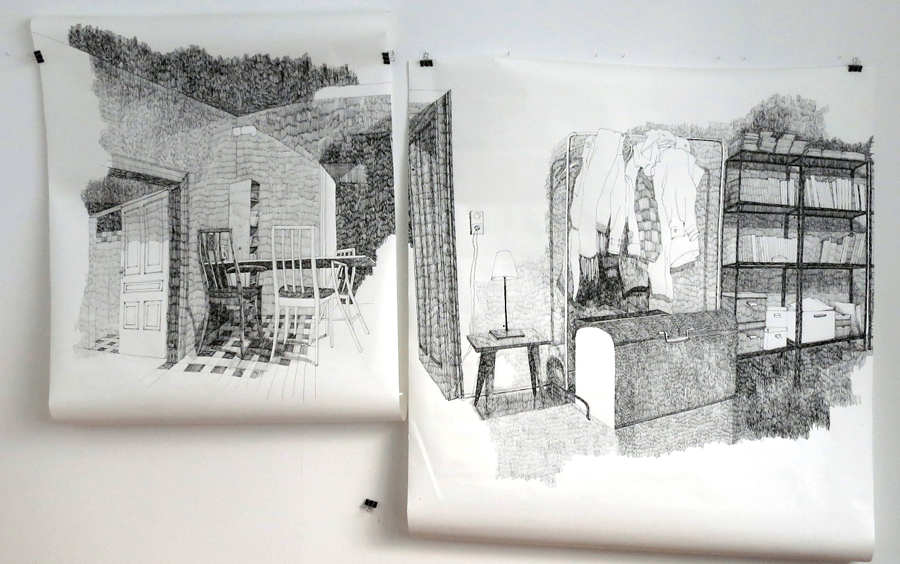 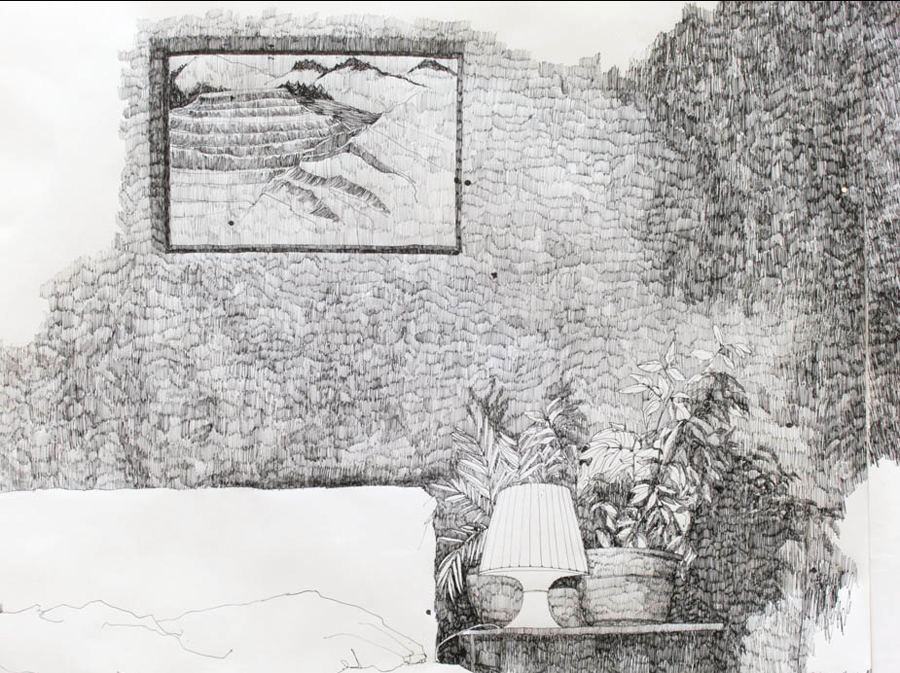 D&P: Does Vienna, as a city, influence your work?

A.P.: Sure, the Danube especially. This one magical place that feels like a bit of a vacation in the middle of a capital, was the inspiration for “Summer Chronicles”. The Viennese calm lifestyle also influences me, some might call it boring, I say it’s a good environment to retreat and concentrate on working. The Viennese buildings also influenced my drawing series “ Villes du futur”.

D&P: If you had 24hours to show the city to a fellow creative visiting for the first time, where would you take them?

A.P.: I would take this person to visit my Atelier, that I share with Patrycja Domanska and Felix Gieselmann, two industrial designers. You can check her work here: www.patrycjadomanska.com, she’s really good! Our Atelier has also a very nice terrace where you can have a coffee while getting an insight in other people’s working process. Then to Museumsquartier because it’s still a major spot in Vienna where young and old meets. Maybe to Mumok and Walter Koenig Book shop. Lunch maybe at Ammerling, because they have a super nice inner yard. Coffee at Espresso on Burggasse. Walk around, eat ice cream and have coffees on each terrace that looks nice (in Summer of course). Maybe to the Danube for a swim if the weather is nice. In the evening I would go to the Prosecco bar on the Lerchenfelderstr, my new favourite place! The owner is super nice and serves Prosecco on tap for 1,80 Euros! And in the evening, if the timing is right, to Heuer at Karlsplatz, to my new favourite party Sounds of Blackness, there are so many different people coming together there, the music is great and there is a general good mood spreading, that you usually don’t find in the club scene in Vienna. And in the early morning, to the Würstelstand for a Käsekrainer before going to sleep.

D&P: That sounds like an amazing day! And now, last but not least, will you be working on the ‘Summer Chronicles’ this year, or what does the future hold for you?

A.P.: Summer chronicles is continuing! I got some really nice Winsor and Newton felt tip pens sent by Colart that I really need to try! Summer chronicles is going Eurotrip, I will try to travel as much as I can and find new scenes that fascinate me. I also work on a series of bigger drawings called “Life on Mars” that is still not over. And I got some other projects in my mind that I didn’t yet start, like postcards in cooperation with other creatives, maybe a Summer Chronicles Book when I have the feeling I produced the best pictures possible and can finalize it. I don’t really know what the future holds for me, but I am confident that I will always find new ways and ideas that will keep me going. It’s always about experimenting and finding out if it works out! Because then I can say “at least I tried” ☺

Thanks Ana for taking the time to talk to us. We’d LOVE to see Summer Chronicles made into a  book, so when the time is ready for it, let us know!