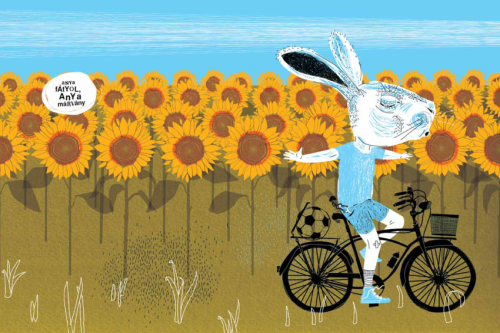 Hungarian children’s book, Milyen madár (What a bird in eng.) is written by Árpád Kollár and illustrated by Nagu Norbert. It won the Bronze at the Joseph Binder Award this year and has riled up wide discussion about its nature. But one thing is for sure, it’s one of the most beautifully illustrated books of the year.

Written in Hungarian by the renown novelty writer Árpád Kollár, who’s previously written merely books for adults, Milyen madár is his first book for children. Compiled of a series of poems dealing with sensitive subjects, it deals with the issues from the child’s point of view.  I won’t say much about the words themselves (mainly because I’m still lacking in the Hungarian language department), but what I can tell and show you are the amazing illustrations by Nagu Norbert.

Norbert, a Hungarian typographer & illustrator was not given an easy task when asked to illustrate the complex poems of Kollár, yet he manages to do it with style and thought. A rabbit journey through the pages of the book from one scenario to another, sometimes laying in a cornfield in deep thought, sometimes riding a bicycle next to huge sunflowers whistling like a young child without a worry in the world. Each illustration interprets the text still leaving room for the imagination of the reader. Even though the book itself deals with some serious issues and taboo subjects, it can not be taken away how delightfully well executed the visual effect of it is. Maybe the skilfully drawn pictures lighten the reader’s mind of the heavy subject, or maybe it’s just deep, serious thoughts wrapped in a beautiful package. However it may be, we recommend you add it to your bookshelf, find yours here.