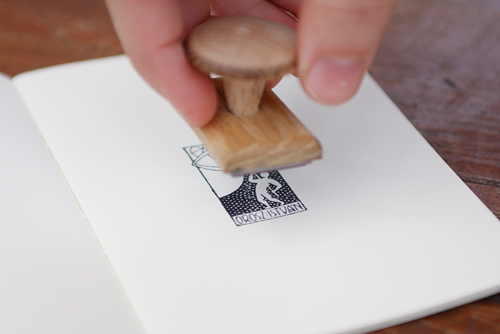 ART+ILLUSTRATION
·28/02/2016
Share
Ex libris, more commonly known as a bookplate, is a small print or illustrated stamp that is used to label books to indicate its owner. Typically bearing the name, monogram, motto, device, coat-of-arms, crest, badge or any motif that relates to the owner of the book. A tradition that reaches as far back as BCE Egypt, bookplates became common practice in Germany in the Middle Ages when an early adaptation of a library was born. With personalisation becoming a bigger trends by the year, it comes as no surprise that an ancient tradition like ex libris would come into fashion again. Hungarian design studio Halisten creates beautiful designs for clients from various professions and backgrounds, with detailed illustrations embodying the owners personal style, craft or needs. Ex libris for János Arany, a choir-master and a teacher with a wide range of interests. Ex libris for Ferenc Margl, who requested a peryton. The peryton is a mythological hybrid animal combining the physical features of a stag and a bird. Ex libris for Gergő Gilicze. His bookplate is a dove headed knight to guard his library. He adores the mediaeval culture (even has a badass long sword) and his surname Gilicze, which means dove. Ex libris stamp for István Orosz (also known as Outis). Outis was the name that Odysseus used to mystify the cyclops, Polyphemus. Ex libris for Nikolett Jánosi, a graphic designer. She is a delicate girl, just like a doe. Ex libris for Barbara Bernát, a clever, fighter amazon, who fights for the world’s beautiful things and loves small and big animals as well. Ex libris for Mátyás Dunajcsik. This animal is a water-raven, which is half fish and half bird. Dunajcsik refers to river Danube, our famous king was also Mátyás, whose heraldic animal was a raven, with a gold ring in its beak.