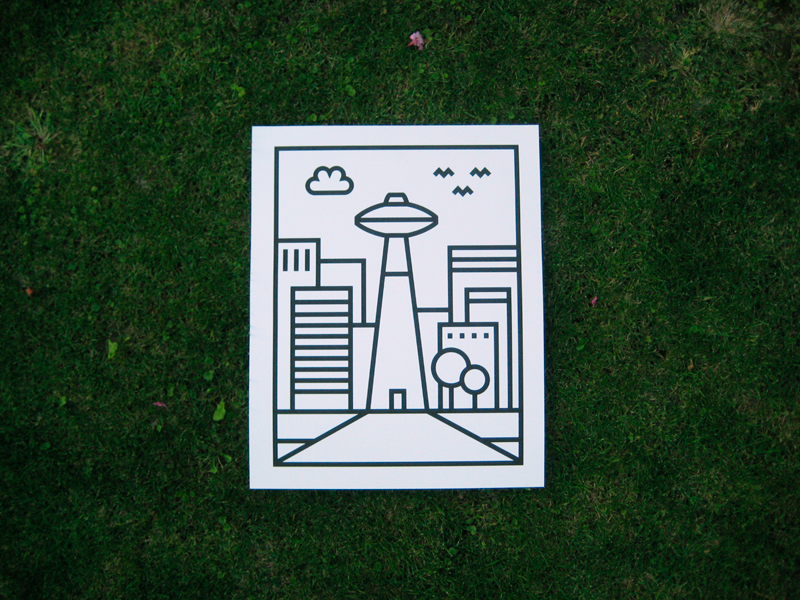 Bratislava based graphic designer and illustrator Michaela Lilhops takes you on a journey through a landscape that you were not even aware existed. In her series of limited edition posters titled Teleport, she showcases the iconic, and not so known landmarks of her home town. The minimal line illustrations are screen printed in black or neon colors, telling the story of the place in question. The city of Bratislava has never been more intriquing! Stone Square, Bratislava, Slovakia
It’s not by accident that Stone Square in Bratislava has been translated to Stone Square.Many years ago, when department store named Prior was prior to be opened, a stone from space landed unexpectedly in the middle of the square at 10am, and remains there until now. Many years passed and it became a meeting point. In the background you can see Hotel Kiev which, they say, will not be there for much longer. That’s why we can call this painting “historical”. Chamois TV Tower, Bratislava, Slovakia
Tallest tower in Slovakia, Chamois, was build with intention of catching signals from outer space. Even now it is a place that ufologists from whole wide middle Europe attend once a year for annual tent symposium. Hotel Patria, Strbske Pleso – a picturesque mountain lake of glacial origin, Slovakia
It was spring of 1965, when a young Slovak actress Magda Vášáryová (then still very little-known) was in this hotel on a leisure stay. After she took a bath in the lake in front of the hotel, she got an offer for a role in the movie Markéta Lazarová, which made her famous. Therefore we can see a ladder–symbol in the landscape painting, which symbolizes the rise. Tatralandia, High Tatras, Slovakia
Well known swimming pool and sauna paradise surrounded by mountains, used mostly in summer. Only a chosen few know that there is a colored flamingo that shows itself next to one of the pools. And it has been showing itself for years, to those who accidentally have a sip of water from that pool. Slovnaft, Oil refinery, Bratislava, Slovakia
Trip with adventure. Plan a romantic evening for two – balloon flight over the flashing Slovnaft. Chance to order dinner on board. Central Train Station, Bratislava, Slovakia
A building made of metal sheet, a japanese-villa-look-alike, will greet you upon train arrival. The legend says, that anybody who sit down on this bench in front of the station, will have all personal belongings teleported immediately and contactless to unknown places within seconds. Wanna try out?

Train Station Poprad – High Tatras, Slovakia
This unique view on sensitively planted concrete jungle in front of Tatras can be spotted from train window on the train station Poprad – Tatry. Recommended for tourists that love contrast of nature and concrete. Beautiful Mountain’s Bus Stop, Paradise of Housing Blocks, Bratislava, Slovakia
On first glance, an ordinary bus stop next to a news stand. But if you miss the bus, a magical bearded grandpa will approach you and you will witness a sleight-of-hand coin disappearance. UFO, New Bridge, Bratislava, Slovakia
Bratislava’s legendary UFO on New Bridge was built in honor of a Synagogue that was destroyed by real UFO in the 80’s of 20th century. Construction on the bridge shows UFO during the operation. Nuclear Power Station, Mochovce, Slovakia
Past, future and infinity. Village next to Mochovce had to make place for nuclear power plant. All that was left untouched, is it’s previous dominant feature – a church, which is now a beautiful asset to power plant panorama. Mister
The legend has is that when you rip out three silver hairs from mister’s mustache, you’ll be granted one wish. The similarity with the former Slovak president is entirely coincidental.