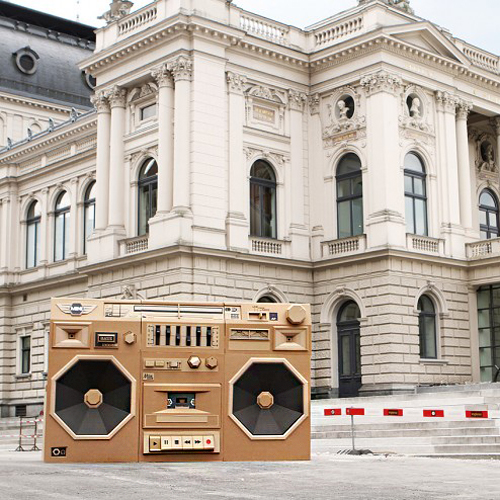 Think About The Box, Not Beyond It – Bartek Elsner

Bartek Elsner is a Berlin-based multi-disciplinary designer and art director with the focus on digital communication and interaction, but he’s also known for his structured paper pieces, calling himself “one of those cardboard artists”! He has built incredible cardboard objects including a replica of a human heart, a motor saw, a life-size fireplace and a gigantic Ghettoblaster, which was commissioned by the International Radio Festival in Zürich back in 2012.

These are works by a man with a strong imagination and even stronger understanding of the craft and the material. Each object is hand made by Elsner himself and has been showcased in multiple exhibitions. Besides his day job as an Art Director, he spends his free time crafting these stunning cardboard pieces. Some are commissioned by commercial clients, but most as just Elsners own work. To keep up to date with his cardboard art, check out his PAPER BLOG here. Mini Ghettoblaster, commissioned by the International Radio Festival in Zürich back in 2012. The Surveillance, a cardboard monitoring camera on the street of Berlin. The Branch, an incredible interior piece made out of cardboard we’d be more than happy to have in our living rooms. Love it, and the crow! The Fireplace, another cardboard piece by Elsner on the streets of Berlin. The Heart is one of Elsners latest pieces, published in August 2013.