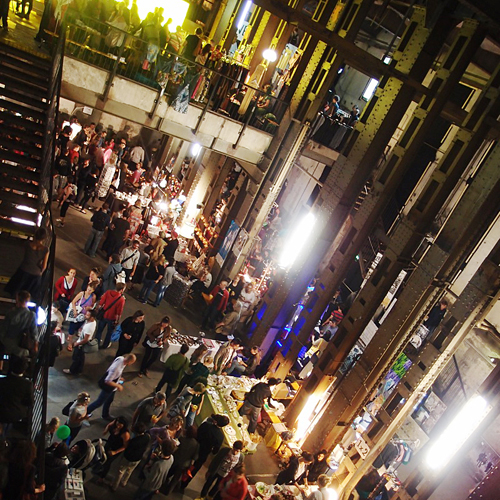 Our hot tip for the weekend was Feschmarkt, which took place here in Vienna: Three days full of design, art and fashion, trendy foods and snacks, not forgetting the kids with mini’fesch. Even though the boiling hot weather kept most Viennese next to the water, the urban youth still found their way to this twice-a-year happening that has already made itself notorious within the city’s design markets.

Feschmarkt is a viennese market showcasing current Austrian as well as  international designers, artists and food suppliers with their latest products and innovations. Even though most of the presenters are Austrian, you can find labels from Germany, Hungary, Chez Republic and Slovakia. This year the market grew bigger than ever before. For the first time it was extended over three days, lasting from Friday morning until Sunday night. Also the area was made larger, covering more of Ottakringer Bauerei’s interior area. The main building where product design, art etc. could be found is amazing with it’s rugged industrial walls, cement floors, large steel staircases and multiple levels. But it was a shame that the fashion, or “mode” as it was called, was changed to a separate location, behind the main area, which made it a bit harder to find. The atmosphere was slightly different between all the areas, changing from lounge music and white walls in the fashion part, to more up-beat and party feel in the main area and the more higher you climbed in the levels the more cozy the atmosphere got. All in all, the place and surroundings were great! Fesch’Art was found in the top floor of the Bauerei Nevertheless magazine in the product area

After finding your way through the labyrinth of indoor sales booths you reached the outside food court area, where you could explore some incredible delicatessen from vegan pies to rustic homemade bread with multiple spreads to choose from and the classics such as the hot dogs, different burgers and everyones favorite, the Ottakiringer beer stands. My definite favorite was the bright red hot dog car by Hildegard Wurst where you could choose the type you wanted, the one called “Amsterdam” with cheddar was so yummy! If you wanted to take some sweets and treats home, you visited the feschmarkt deli, where you could find everything from home made honey to tasty Austrian ciders (amazing!). MostLikely sold their paper animal lamps, which we already wrote about here

As the weather was reaching temperatures as high as 35° during the afternoons, most people were found outside, lounging on the beach chairs over the sand, or laying in the hammocks in the wooden teepee next to the entrance. It was great that the old large industrial building was able to keep itself relative cool during the hot days, keeping the visitors as well as the sellers chill. After visiting, it is no surprise to us why Feschmarkt is one of the highlights of the summer in the design circles of Vienna. Did you happen to see our Design & Paper editor Sini’s label makela at the Gold Fasll Magazin at the market? She does 3D inspired apparel design, mixing bold prints with minimalist scandinavian forms. She uses the same 3D technique in her fabrics, as is used in printed 3D photographs, seen on her brochures and labels.