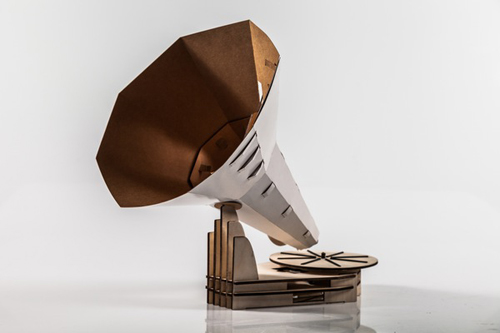 The gramophone was invented by Emile Berliner over 120 years ago, and it still remains one of the most iconic inventions that truly changed entertainment for the masses. Before it, the only way to enjoy music was to hear it live. In these days of technology and digital music, Jónófón the paper gramophone designed by Jón Hólmgeirsson is truly something unique!


Some weeks ago we wrote about the PulpPop – the Evironmentally and Design Conscious Speaker, which got us interested in the possibilities of paper in electronics and music devices, something that is rarely thought in the same sentence. The strength and durability of paper as a material is questioned, but now we have found an other design that proofs that wrong!

The Jónófón, a paper gramophone, was the graduation project of Jón Hólmgeirsson from the Icelandic Academy of Fine Arts (product design department) in the spring of 2012. It is an acoustic vinyl-record-player that uses a paper cup and a horn made of paper to amplify the music from the vinyl record. The Jónófón is designed to show the record in the foreground, with a simple and light design that takes music players back to an era where enjoying and playing music didn’t require one to be well versed with technology.

The simple, yet classic design in a recognizable Scandinavian style leaves all the parts open to the eye as a tribute to the simple mechanics that are used in the player. Hólmgeirsson states that “Jónófón is some sort of a return to simplicity while the technology today has gotten so complicated that it’s not made for the average Joe to understand“. And so he decided that Jónófón comes in a flat-pack, that the user gets an understanding of how the player functions while putting it together himself from scratch. It takes less than 30minutes to put together, but in the process the user builds an emotional bond with the player which is rare in these days. The player itself is put together from thin plywood and contains a simple electrical system. The horn is made of a thick paper, there is a needle, a plastic film, some steel wire and the bottom of the paper cup that is used to amplify the soundwaves that the needle carries up from the record. The idea is, that the material used in the horn colors the music with a certain feeling and that is why the music payed through the Jónófón is characterized with the color of paper. The Jónófón (named after its creator) is still a work in progress and no official release date has been issued. It has been showcased at several design shows and publications, it’s only a matter of time until the Jónófón will be on sale. To keep up to date on the release, and to become a fan, you can find Jónófón on facebook.

Hear what the Jónófón sounds like in the video below!