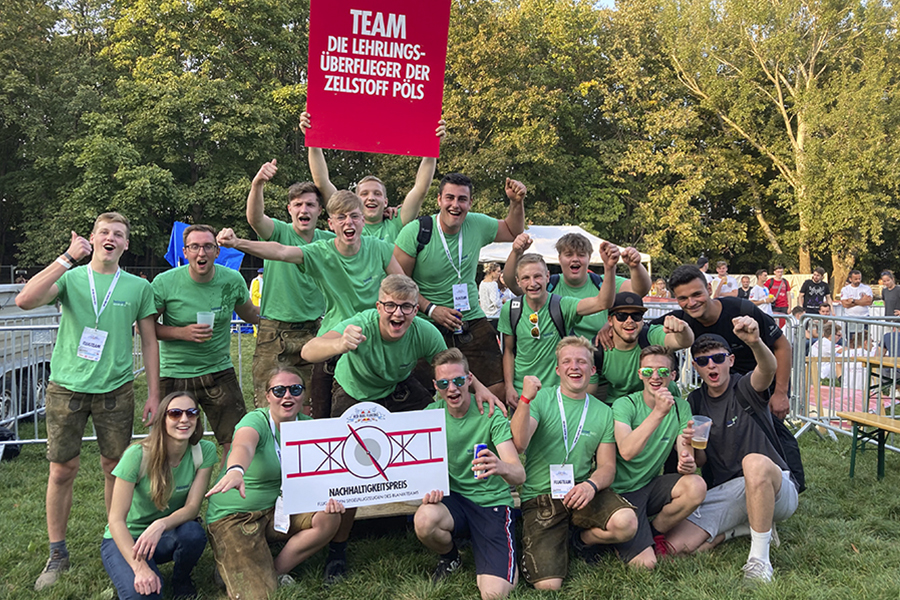 On September 26th, 2021, the Zellstoff Pöls apprentice team gave the “Flying Rhino” wings to the applause of thousands of spectators. In addition to many unforgettable memories of an extraordinary day, the apprentices were also able to take home the special award for sustainability.

We sat down with the apprentices from Zellstoff Pöls, Europe’s leading elemental chlorine-free (ECF) bleached softwood sulfate pulp and kraft paper manufacturer, in order to get an in-depth account about this one-of-a-kind experience, the challenges they faced during the competition as well as the rewarding feeling of their success during the FlugTag.

The Red Bull Flugtag has been inspiring millions of people around the world since 1992: the flight crews put all their creativity into developing a self-made aircraft and the pilots use it to take off from a six-meter-high ramp. The short pre-flight choreography counts just as much as the creativity of the flying object and the distance that is covered before the water landing. In addition to the distance and creativity, the voting by a top-class jury was also decided on site: winter sports stars Marcel Hirscher and Felix Neureuther, tennis idol Dominik Thiem and snowboard Olympic champion Anna Gasser were among them.

How did you decide to join the RedBull Flying Day?

Apprentice team: Zellstoff Pöls apprentice team: Our new board member – Werner Hartmann – read on a business trip that the Red Bull Flugtag (Red Bull Flying Day in eng.) will take place in Vienna again after a 9-year break and since our team of 30 apprentices rarely had the opportunity to be in personal contact during the pandemic, this project was ideal to strengthen and bring the team back to life. The joint construction of the Rhino has helped us to get to know each other, to exchange ideas, to work together on perfecting it for flight.

Apprentice team: The core team consisted of 4 apprentices: Thomas Schaffer was the pilot, Lisa Wiesnegger, Mario Bischof, and Stefan Kreuzer made up the Flugtag team. However, all 30 apprentices were involved in building the Rhino.

How did you develop the idea for FLYING RHINO? What was the concept behind it?

What materials were used?

Apprentice team: Wood, our Starkraft paper, even the confetti at the dance performance were all “bio”- great importance is attached to the materials used – only recyclable materials are allowed.

What were some of the weekly challenges which Red Bull has announced and how were you able to solve them?

Apprentice team: We were tasked to produce videos where the team’s joy of being there is captured, and it was also a task to introduce our pilot with all his qualities. The construction of the Rhino also followed, as was the “Vogerltanz” (Bird dance) reinterpreted by the team. 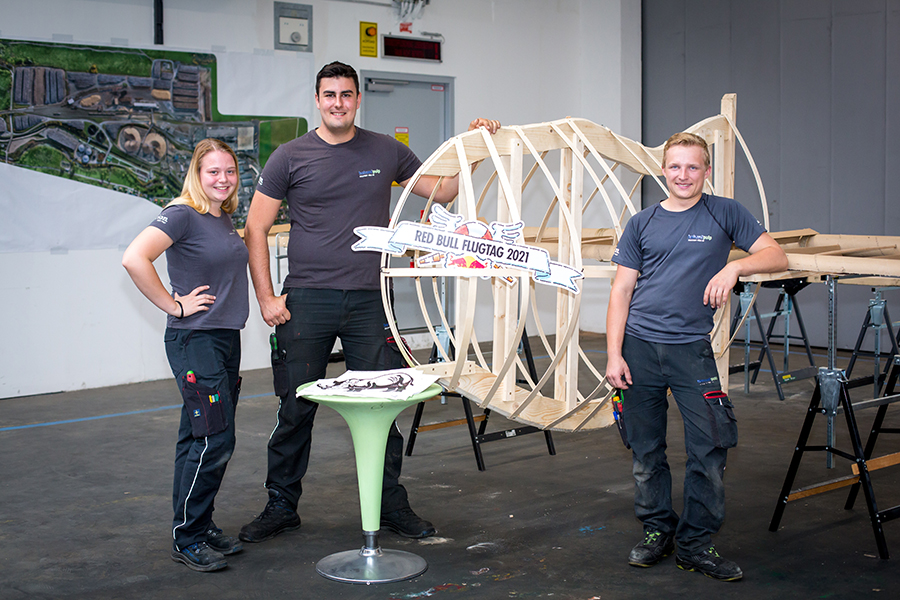 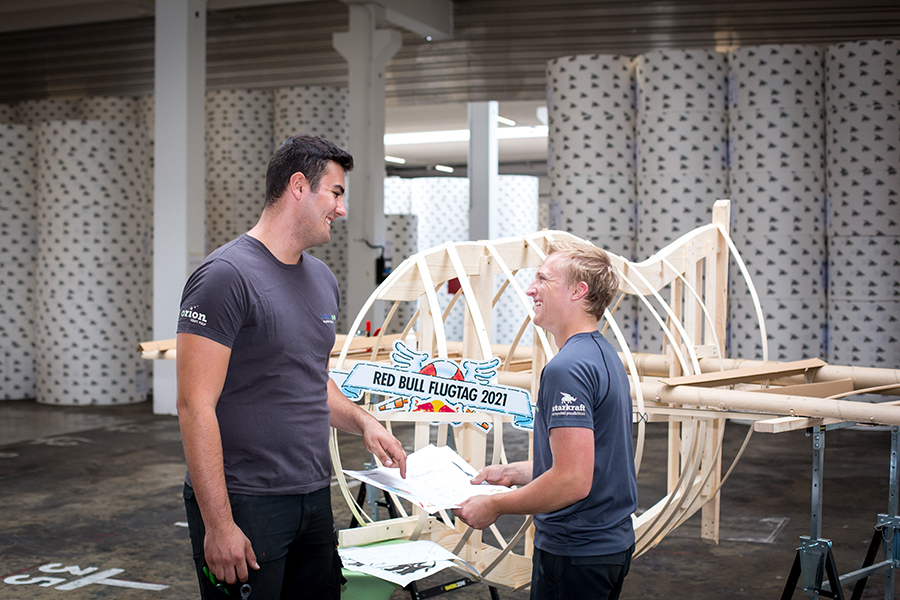 Tell us a bit about the day of the big event: 26.09: how was the atmosphere, how did you feel, how did the other participants do? What other interesting projects were there?

Apprentice team: Each crew – consisting of a pilot and three crew members – had 30 seconds to present themselves and their aircraft as spectacularly as possible. Our team of apprentices, consisting of Thomas Schaffer (pilot), Lisa Wiesnegger, Mario Bischof, and Stefan Kreuzer, was highly motivated. They gave our Starkraft logo wings and – after an “animal” pre-choreography -sailed with start number 12 with the “Flying Rhino” over a distance of 7 meters. Before that, our high-fliers apprentices had been selected from countless registrations among the 40 most creative teams and thus fought for their place in Vienna.

In addition to the numerous spectators, the team was loudly supported by the Pöls fan club, consisting of almost all of the apprentices from Zellstoff Pöls AG. They were also significantly involved in the construction of the 109 kg Flying Rhino. Only wood and paper were used as building materials – one of the main reasons why we managed to take home the sustainability award in the end.

How did the flight experience go?

Apprentice team: The center of gravity of the Rhinos was in front, and as such, the pilot had to lean backward, and despite the considerable weight of 109 kg, the Rhino managed to fly! Our pilot even earned us a few more meters by jumping forward.

In order to see the flight experience for yourself, we invite you to take a look here.

What has this experience brought you, on a personal and professional level? Would you do it again or recommend it to someone else?

Apprentice team: If team building had a name – we would call it Red Bull Flugtag! It really brought the young people together. The external effect is of course also remarkable – our appearance as the “winner of the sustainability award” makes us extremely proud. When the Flugtag takes place in Vienna again, we will definitely apply again.

Apprentice team: A cool Red Bull event – young and old alike enjoyed themselves. I would also like to share that we had a story to tell during our performance: we want to protect the rhino, which is threatened with extinction, and in addition to the awareness during the event, since 2016 we have been contributing to foundations in South Africa to support these beautiful animals!

We are celebrating our apprentices’ success and the unforgettable memories of an extraordinary day! 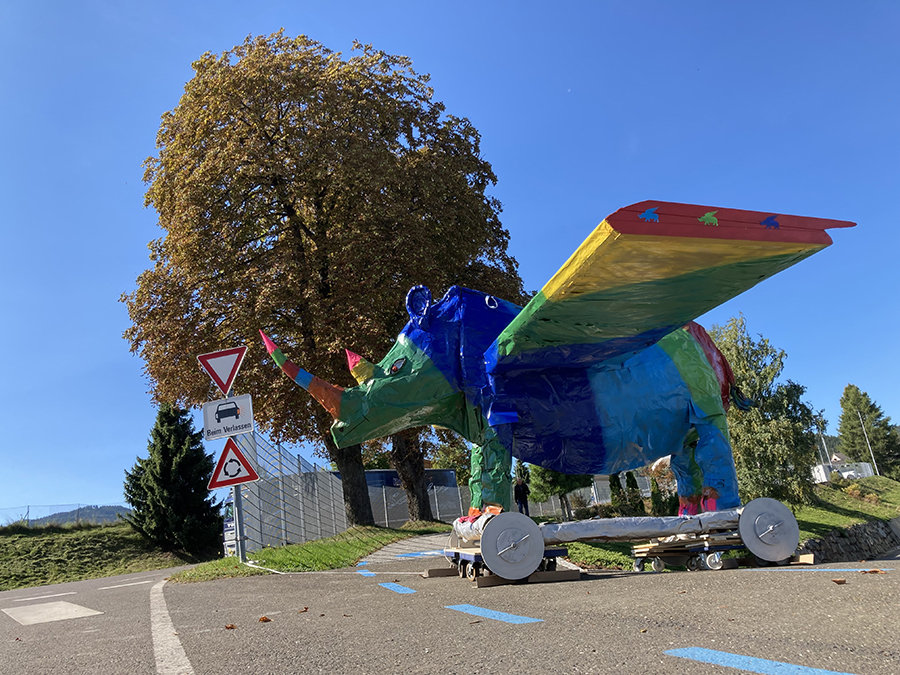