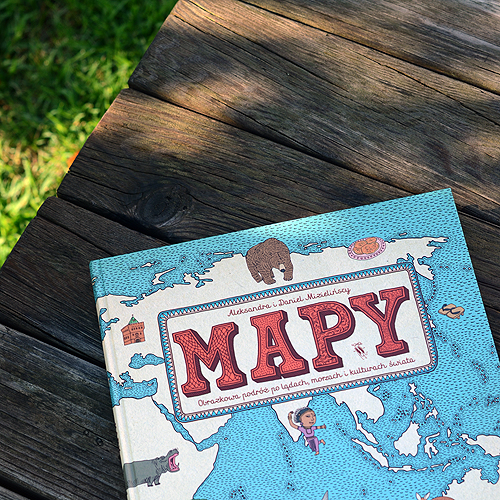 MAPY – An Extraordinary Journey Around The World

Imagine to travel the world and to see geysers in Island, camel caravans in the Egyptian desert, ancient Maya cities in Mexico, to play cricket in England, to go skiing in Austria and to taste 100-year-old eggs in China. MAPY, a beautifully illustrated book containing 51 huge maps, makes it possible. The book takes you around 42 countries on 6 continents in just an afternoon.

Mapy is much more than an ordinary atlas, it is a visual feast for readers of all ages, with lavishly drawn illustrations by Polish authors Aleksandra Mizielińska and Daniel Mizieliński printed on Munken Polar. The book features not only borders, cities, rivers, and mountains, but also places of historical and cultural interest, eminent personalities, animals and plants, cultural events, and many more interesting facts associated with every country and region. We love Aleksandra Mizielińska’s and Daniel Mizieliński’s distinct drawing style which look great on Munken’s uncoated paper. (Munken is exclusively available at Europapier.) Austria is, for instance, covered by snow-clad mountains and the most important cities are represented by their landmarks such as the Stephansdom in Vienna.  People are doing outdoor sports and you can discover the endemic flora and fauna including Edelweiß and Capricorns. You can meet Wolfgang Amadeus Mozart and Sigmund Freud and eat Wiener Schnitzel and Sacher Torte. It took the designers three years to finish the book, but in the end, it paid off: Mapy became a huge success and was translated into English (Maps), Dutch (Atlas), French (Cartes), German (Alle Welt), Italian (Mappe) and Russian (карты).

Due to its great success, the authors just launched a successor called Mapownik (little map). Mapownik is more like a drawing pad and contains 36 creative tasks for map enthusiasts which range from designing your own maps and flags to preparing a trip to Mount Everest and trying to find the mythical Minotaur. Aleksandra Mizielińska’s and Daniel Mizieliński’s are a married couple of illustrators and graphic designers. Already during their studies at the Academy of Fine Arts in Warsaw, they founded Hipopotam Studio for a book and web design as well as typography. They are authors of several successful children’s books and received various awards including the prestigious BolognaRagazzi Award 2010.

Want to know where to find Mapy? Click on the different language versions and they will lead you to the various online shops!

We, however, have to warn you: Reading Mapy leads to wanderlust! So, bon voyage and have fun!