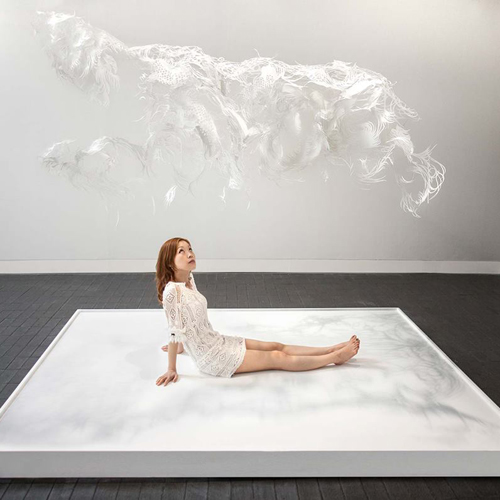 We have been fascinated with paper cut art for a while now and thought we had seen it almost all…until we discovered Nahoko Kojima. The London-based Japanese artist takes paper cut art to a whole new level. See for yourself!

Nahoko Kojima was born in Hyogo, Japan, in 1981 and began her training at school at the age of five. In Japan, paper cut art has been a tradition for thousands of years. Seven year ago she moved to London and set up her studio SOLO KOJIMA where she creates some truly magical paper sculptures. She draws her inspiration from humans, animals and the forces of nature.

“The curiosity of Paper Cut Art for me is that you can express all dimensions of the world using a single sheet of paper. I am always fascinated at the character a single sheet can take on and how much affection people can show to a piece. It’s quite magical.” We agree! The process starts with sketches and tests. When cutting she considers not only the positive but also the negative space. Since all of her works are hand-cut from a single sheet of paper, there is no way to correct mistakes. Nahoko Kojima uses extremely thin scalpel blades which need to be replaced every three minutes. The result are large-scale paper sculptures which suspended from almost invisible threads seem to effortlessly float in the air. Change and motion are very important elements of Nahoko Kojima’s work “hanging a piece and also the way that it changes over time is all part of the charm of my Paper Cut Sculptures”. Her most famous work, the Cloud Leopard, was unveiled in 2012 during Craft Council’s show at the renowned Saatchi Gallery in London. It took her about five months to complete and it is made entirely of one very large sheet of black paper. Her latest and most challenging work yet is Byaku, a swimming life-size white polar bear, which was exhibited  in the Jerwood space in London until this week and now tours through the UK.

If you want to know more about Nahoko Kojima and her art, visit her webpage and her Paper Cut Art community on Facebook.