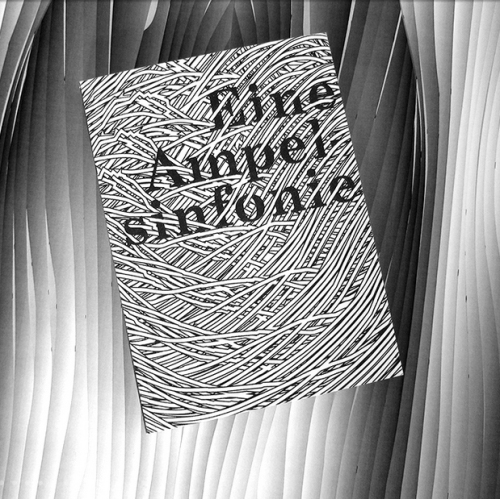 A Vienna-based micro-publishing collective Soybot consists of six members who share an affinity to graphics, illustration, and printing. The work of the collective is characterized primarily by the fact that their various printing works and publications are produced with a Risografen, a high-speed digital printing system fed with rice paper and soy ink. A printing technique that was also used on one of their latest projects, Eine Ampelsinfonie, an interesting study on sound visualization in four different physical positions in Vienna.

The six-man team of Soybot – 2ter, Burnbjørn, Tobias Eggér, Marie Fegerl, Lena Gold, Gerhard Jordan and Malin Schoenberg, occupy themselves with topics such as Hp Baxxter, tribals, wrestling, ufos, and poems, which are turned into artistic graphics, fanzines, books, posters or illustrations. Marie Fegerl’s Eine Ampelsinfonie (an Ampel Symphony) being one of them. At first glance, Soybots work almost seem incoherent – which has become a trademark for the creative collective, but on a closer look, you’ll find an insightful study into the subject with an unforeseen viewpoint.

Eine Ampelsinfonie is a sound study on four different physical positions in Vienna. Each place represents one part of the 4 part symphony. Fegerl, who also works as a sound engineer, analyzed sound recordings of these locations and then transcribed them into visual appearance. This visualization works as a graphic notation of an irregular, abstract component of our environment, the noise of the city. A crossroad turns into a concert, which can be attended using a score at a certain time. The symphony combines information, analysis and subjective impressions, a readable, musical experiment. The Ampelsinfonie is an interesting take on our beloved city, giving it yet another aspect to study and marvel. The idea certainly catched my attention as did the creative and unique implementation of Soybot. See more of their works here, and find out how get one of the only ten produced copies.