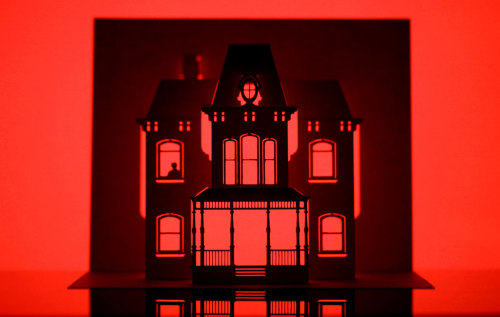 In the theme of Halloween, London based horror-film enthusiast, art director and kirigami artist Marc Hagan-Guirey has created paper cut versions of famous haunted houses, in a series he calls Horrorgami. 13 iconic buildings familiar from such classics as The Shining, Rosemery’s Baby and Ghostbusters will get your spine shiver and palms sweaty. Paper has never been this scary before!

Marc Hagan-Guirey has created all together 13 different sets from horror films and T.V. shows, which were displayed in a self-titled exhibition in the One-And-A-Half gallery in London last year. The specific technique he uses is called kirigami (from Japanese “kiru” = to cut, “kami” = paper), where the paper piece are both cut and folded to make the desired piece. What makes these pieces impressive is not just the visual aspect but the realization, each one is made from a single piece of paper!

He chose the sets or buildings from some of the most well-known horror movies: the Bates’ Motel in Psycho, fire station from Ghostbusters, the Dakota building from Rosemary’s Baby, the Deezte residence from Beetlejuice, the Venice waterway from Don’t Look Now, The Overlook Hotel from The Shining, The Amityville Horror, MacNeil residence from The Exorcist, Monroeville shoppin centre from Dawn of the Dead, the house from the Munsters, Hill house from the hausting and the Ennis house from House on Haunted Hill, and of course 0001 Cemetery Lane from the Addams Family. Each Horrorgami is sold as a limited edition of 13 ( how fitting!) for purchase on his site here. Also, check the video in the end where the artist tells about his passion for horror-films, what inspired him to do Horrorgami and what’s coming next.