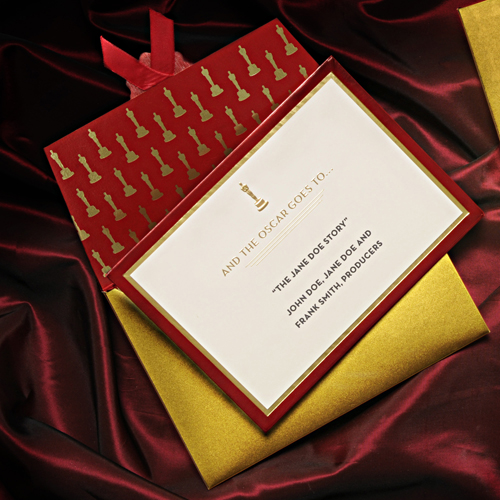 Ever noticed the shining gold Oscar envelope? Some weeks ago at the Gmund Brand Convention our publisher Anna Palige had the pleasure to meet Marc Friedland, the designer of the official Oscar envelope. Three years ago, the designer approached the Academy and convinced them to glam up the Oscar stationary to create something truly memorable. Because believe it or not, before that the secret of who wins the Oscar was hidden in some standard, white, boring envelope.

The Academy has used sealed envelopes to reveal the name of the winners since 1941. Although the envelope is touched only by the presenter and the nominees, it is still seen by hundreds of millions of viewers around the globe and even announced by the words “The envelope please…”. It was clear for Mr. Friedland, that this prominent envelope needed a revamp!

His custom designed Academy Awards envelope is hand-crafted  from an iridescent metallic gold paper and bears the name of each award category on its front for the audience to see. The inside of the envelop is high-gloss red and features a hand-stamped pattern of Oscar statuettes in gold-leaf which is also visible on the outside of the envelope. Each envelope is closed with a red satin ribbon and a red and gold embossed seal.

With the words “And the Oscar goes to…” the category presenter breaks the seal and pulls out a heavy-weight white card with a red frame revealing the winner’s name, which is printed in charcoal ink.

The envelope was an immediate success and everybody wants to keep it. There are even some past Oscar winners who want to exchange their old envelope for the fancy new one! Additionally to the evelope the designer created the invitations for all of the Oscar related events in 2013. What do you think about the Oscar stationary? We from Design & Paper wish you a fabulous Oscar ceremony !