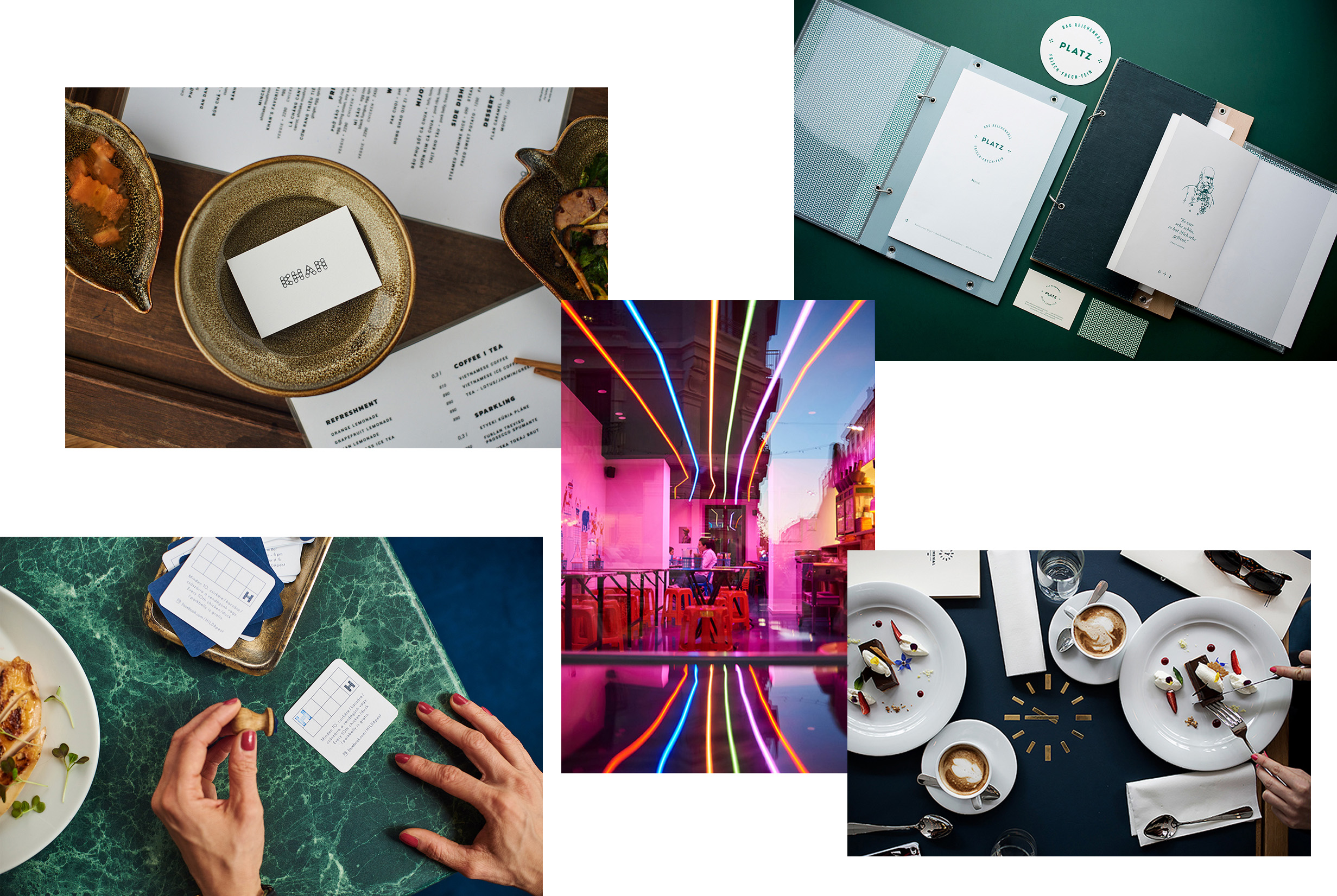 Eszter Laki – the undeniable queen of restaurant branding of Hungary has a remarkable portfolio under her belt, including over 20 editorial and branding concepts for the local food and restaurant scene in the designer’s hometown of Budapest. It seems to have become the norm for aspiring as well as established restaurateurs to seek out Eszter’s expertise, as most of the eateries opening their doors in recent years have trusted the designer with her on-point taste and talent. Lately, her reputation has spread across borders as her work can be found in Spain, Switzerland, Germany and beyond. Usually, I pick one design project to feature at a time but browsing through Lakis work I could not bring myself to choose. So here, please enjoy eleven – each more gorgeous than the previous – restaurant branding concepts by Eszter Laki.

The Barcelona-based food bar Levante is an effortless, honest celebration of the Mediterranean lifestyle: endless socializing above perfectly simple food, embraced by tons of lush green plants. The airy graphics imitate the dynamics of the wind which has its own dance with every little plant and leaf found in its path. The windblown, handwritten Levante logo has an even more whimsical version used like Leeee. The color palette is ranging from bright, vibrant tones to peachy sunset-orange and ocean-blue shades.

Located in downtown Budapest, Hilda Rotisserie is a charming restaurant which offers top-quality, free-range poultry food focusing on grilled chicken. The branding is heavily influenced by the architecture, down to its name (female equivalent of József Hild, the building’s architect) and is seen in the details: the soft, curvy H letter logo and the velvety blue and golden tones in art deco style.

Soï canteen brings that authentic Thai street food atmosphere of little red plastic chairs and the rainbow neon lights to Geneva. The colors come from the Thai flag with some added faded yellow inspired by the hand-painted signs and the lividness of old posters on the streets of Bangkok. The comic strip-like letters have very special characteristics: the Thai translation of Soï contains uniquely designed details, a one-of-a-kind font which is a full modification of the original Latin letters.

Börze is a contemporary interpretation of the early 20th century’s Hungarian hospitality and food culture where cafe halls, elegant deli counters, and other glorious details were part of the middle class’ everyday life. This nostalgic visuality is supported by playful yet elaborate drawings of animal characters by illustrator Zsófia Perger.

Khan is the second venue of a Budapest based group of Vietnamese-Chinese friends who believe in connecting cultures through gastronomy. Khan means majestic which applies to the food service as much as to the interior design. Given that the menu contains eye-catching courses in a fabulous environment, the graphic identity was deliberately kept as simple as possible to let the food prevail. The logo is derived from the lattice pattern of the woven lampshades which are typical Asian products originally used as fish nets.

A hearty specialty coffee place opened in the XIII. district of Budapest, Újlipótváros, densely packed with icecream-colored Bauhaus buildings and small-scale ventures creating a charming environment. My Green Cup reflects this affectionate, homely atmosphere of the neighborhood, while the heart of the interior and branding design is the jewel of the place, a custom made deep green Synesso espresso machine. Even the graphic artworks on the wall by Levente Csordás are following the color codes.

Urban Tiger is an Asian restaurant in downtown Budapest and run by the same owner as Hotel Rum next door. They are connected both operatively and aesthetically so the interior design of the bar follows the visual principles of the neighboring hotel. The dressed tiger in the logo is a domesticated, urban version of the Asian animal which is a national symbol in many Asian countries and used as a synonym for economic growth as well.

The SÁO哨 food & bar is the result of a long-lasting friendship between the two Vietnamese and one Chinese owner, a special partnership which is nourished by the same gastronomical fascination and the appreciation of Asian home cooking. This connection is emphasized by the chosen name Sao, which has synonymous meanings in Chinese and Vietnamese culture: bird, whistle, and all the positive associations coming with it.

9 Terminal – a restaurant located in the building of Design Terminal, Budapest, Hungary

The Terminal Restaurant resides at Erzsébet tér, in the heart of downtown Budapest. The building was operating as one of the largest and busiest MÁVAUT bus stations in the city for decades back to 1949.
The interior design was conceived by the 81font architecture in a tight cooperation with the graphic identity – reserving, recalling and highlighting the original features of the building. This attitude resulted in the emblematic logo, the minimalist copper clock which has served the building from the very beginning.

The restaurant is located in the heart of Bad Reichenhall which is a spa city in Upper Bavaria, Germany. Tradition and modernism meet in the interior concept and the design. The identity was based on the original Platz restaurant in Budapest, just it had a bit of the “Kaiser’s touch” – since the building is located at the Kaiserplatz 1. The original illustrations were made by the illustrator Anna Holló. The menu folders were made by the amazing avantgarde designer Mrs. Herskin.

The staff at Bar Pharma are more like pharmacists, than bartenders, who cure your soul with the best cocktails, rums, gins from around the world. That’s why the old pharmacies, chemistry laboratories inspired the visual concept. The logo was engraved into the tiny medicine bottles (used for the shots). There is a periodic system with all the alcohols which you can find in the Pharma.