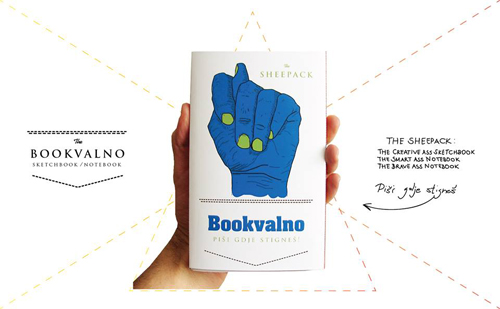 Bookvalno is a brand of notebooks by the artists known as Mulynx from Bosnia and Herzegovina. The funny and creative Big Ass Collection consists of handmade notebooks and sketchbooks, done by the artists himself. With names such as Creative Ass, Smart AssandBrave Ass, it gives the feel of a tongue-in-cheek style, yet, the books are done in very high quality. Muris Halilović – Mulynx, is more well known as a video/digital artist but has lately been wandering into the world of paper. The story of why he started creating these notebooks is very traditional in the world of design: In a place of need comes creation. A few years back, it was very hard to find decent notebooks in Bosnia and Herzegovina, so Halilović thought he’d make his own. After making a few for himself and his girlfriend, it was by chance that a friend spotted him on the bus using one of his own designs. After requesting to have one for herself, the idea struck him, “Oh boy, I could start a business with these notebooks”. And in the artist’s own words, after getting off the bus he felt like “such a creative and smart ass” for having the idea, that he decided that this is how he will call his notebooks.

The Big Ass collection consists of the Creative Ass Sketchbook, the Smart Ass Notebook as well as the Brave Ass Notebook. He also did some miniature versions for travel use and the Astronotes series, inspired by space and the universe. The books come in several different colors, one for every taste. Even in our digital times, Halilović believes that no smartphone app or computer program can ever replace the feeling of paper and pen. He compares writing or drawing in the sketchbook to playing the guitar, which we believe to be a great comparison. Pen and paper is the fastest and easiest way of expressing yourself, and will probably never die, at least among the artists and designers of the world. We are happy to hear that Halilović is also becoming more aware of paper, having fun with it, expressing himself with it, and really thinking about the possibilities it offers. He told us about his future plans to create a totally recycled notebook made of organic materials. We are certainly looking forward to that!