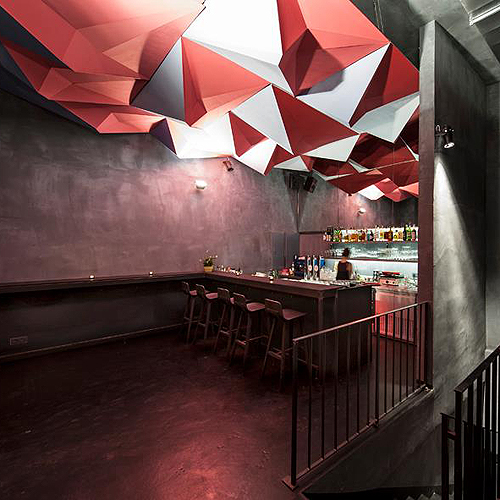 If Dogs Run Free is a modern cocktail bar in the 6th district of Vienna, designed by Tzou Lubroth Architekten. The interior is incredibly well designed, with the ceiling being covered with upside-down peaks, inspired by the mountain landscape of traditional Chinese painting. This is the place to be, and seen, at cocktail hour!

The bar is owned by architects Gregorio Santanmaria Lubroth and Chieh-shu Tzou, an actress, a restaurateur and a graphic designer, who teamed up to design, build and launch the bar themselves. The name, like the space itself, is meant to invite fantasy. The idea was to build a place where a “larger conversation about design and art can occur”, but also to serve as a watering hole for the locals.

The main focus in the interior is on the ceiling, as the rest of the place is more or less left bare, with dark plastered walls and an asphalt floor. The whole focus being on the ceiling, covered with an installation called “Man and Nature” reminiscing simplified forms of nature. We absolutely love this origami-like installation!  The design is changed ever once in a while to bring new life to the bar, but also keep the discussion alive. The first installation was done by the owners themselves, in the future the space will see works by new artists and designers. When you walk in the door, the focus is one the bar situated at the back wall, as the eye naturally carries over the dark surfaces and oak and steel furniture. The large mirror behind the bar reflect the space and the ceiling to form an image of never ending space. If makes the interior feel larger, which is surprising for the very dark space. But, the bar wouldn’t be a bar with-out the cocktails! And, oh, how can this place do them! Instead of offering the same old tired drinks that has become somewhat a cliché for Viennese cocktail bars, the owners put in considerable effort to serve exotic, archaic, obscure or otherwise vary rarely seen cocktails. With a strong preference for recipes from the dawn age of the american bar. If you want an old-fashioned cocktail done right, this is the place to go! Very modern and fashionable interior, mixed with Mad Men style cocktails, makes a perfect happy hour!