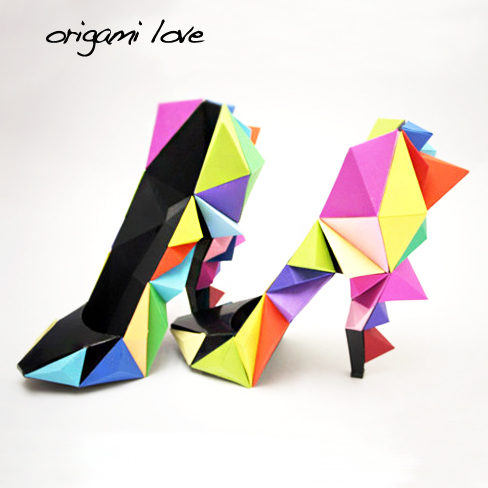 One of the biggest trends in the design world for the past few years has definitely been the origami. This ancient art of paper folding has greatly influenced artists and designers from fashion to architecture, inspiring numerous origami style products and spaces.

Ori (-folding) kami (-paper), is literally what its name entails. The idea is to turn a flat sheet of paper into a finished art piece by folding and sculpting, without the use of glue or scissors. Made entirely with your hands, and nothing else. Originating from Japan, the art form came popular in the mid-1900’s in the western world. The visually clean and technically simple origami style is widely used in the design world. This centuries-old technique, dating back to the 17th century AD, interestingly enough is often related to fresh, geometric shapes and a modern feel.

We looked into the trend and how it shows in different areas of design. It’s interesting to see how it mixes with the current color trends in fashion, how it is very big in lighting design at the moment and how it translates into a much larger scale in architecture.

The origami technique is often applied in fashion design, as the idea of folding is easily adapted into soft textile materials. It gives the garment a more rigid silhouette, keeping the form clean and strong. Lately, it has also been very popular in accessories, such as bags and jewelry. The origami style looks amazing with the current trend of pastel colors, and soft textures. See below and find your favorites for the summer. We fell in love with the Origami Jewellery by the French designers Claire Naa & Arnaud Soulignac. Origami is also très en vogue in interior and product design. The strong angular shapes and forms can be seen 0n products ranging from wallpapers to vases and the classic of the design world, the chair. Lately we have been seeing many adaptations of it in lamps and lighting fixtures. In the Ori light fixtures by Lukas Dahlén, a pattern forms around the shade with the origami folds, giving it a touch of luxury with gold paint inside.

The style of origami is also quite popular in furniture design, and the clean-cut and white Origami Chair by So Takahashi is now on our editors’ must-have list. The steel chair looks light and modern, as the material is bent to look like folded paper, a slight but obvious reference to its inspiration, the origami. Origami is taken to the extreme in architecture, where the scales and sizes are much larger. The shapes are found in the structures and often in the exterior, as the technique enables multiple frame options and various spaces with-in.  Origami has definitely become a trend in contemporary architecture, as the popular 3D modeling and rapid prototyping makes it possible to mimic  the elegant but complex origami folds into the structures. The finished look often being minimal and modern. A perfect example of this trend is the Preston Scott Cohen’s Tel Aviv Museum of Art in Israel. What do you think about the origami trend? Hot or not? We for our part love it and will soon try to do our own paper origami – so stay tuned!