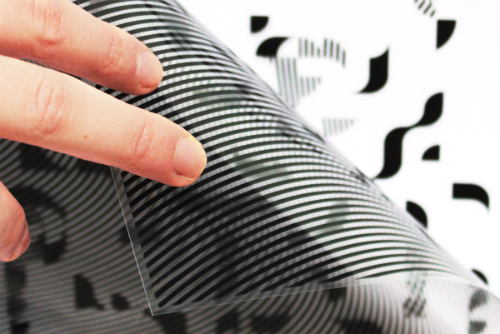 Illusion – a thing that is or is likely to be wrongly perceived or interpreted by the senses, a deceptive appearance or impression. Agnes Herr is a graphic designer based in Budapest. In her work, she mainly focuses on identity, typography, branding and web design, with a special interest in the world of optical illusions. In her poster design Perception, she blurs the line between perception and reality. For the past four years, Herr has studied the subject of illusion in greater depth, combining geometric moire pattern with an optical illusion. The two-dimensional space can be decomposed into geometric shapes, which she used as the basis for her work. Based on the lattice structure, the pattern splits the space and then compiles it again. With two planes the final illusion can only be perceived with the aid of the third dimension. The distorting effect creates a changing image that can be observed from different directions. Grid – a lattice with a changing thickness and curly, wavy forms. Poster consists of two layers. The typography takes place on the base layer and the grid is on the transparent top foil layer. Typo – the letters are build of basic geometric shapes.