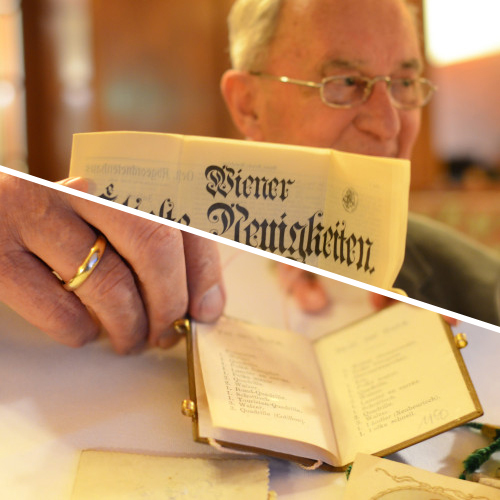 Yesterday the most famous ball of the season took place: The Vienna Opera Ball. Crowds of ladies in beautiful ball gowns and gentlemen in black tail coats flocked to Vienna State Opera to enjoy a night of dancing and socializing. At the entrance to the ballroom the ladies received a gift by the organizer. This year it included a notebook, which comes quite close to the original form of this gift: the dance card, where gentlemen could reserve a dance with their chosen lady. We met Stephan Schwab-Trau, one of the biggest collectors of dance cards,  who took us on a journey to the 19th century and showed us his collection of dance cards – each a small masterpiece! Can you briefly introduce yourself?

My name is Stephan Schwab-Trau and I am one of the biggest collectors of so called historical „Ballspenden“ also called „Damenspenden“, which are gifts that women receive at the entrance to the ballroom from the organizer of the ball. My collection comprises 2.600 to 2.700 items from 1840-1914.

What is a “Ballspende” exactly?

The core of the “Ballspende” was the so-called dance card. In its original form the dance card was a small booklet which comprised a list of all the dance titles, which would be played that night, including the composers. Next to each dance there was a blank space for the name of the gentleman to whom the lady would grant this special dance. At those times women were accompanied to the ball by their mothers or chaperons and the men needed to ask their permission to be penciled into the women’s dance cards, which were attached to the ladies’ wrist or ball gown. The dances were divided into two parts – dances before the pause at midnight and after the pause. Usually the first half ended with a Quadrill and the second half started with a ladies’ choice waltz – I guess this was necessary otherwise the gentlemen would not have started to dance again after the break 🙂 How did the dance cards evolve over time?

At the beginning the dance cards were quite simple booklets made of paper. Little by little they became more and more elaborate: From gold printing and exclusive finishing such as embossing or copperplate engraving to elaborate little books with covers made of leather, wood and velvet. Dance cards reached their heydays between 1880 and the start of the First World War when they became real souvenirs. The dance card of the Industriellenball from 1883 was, for instance, hidden inside a metal desk, which you needed to open to extract the small dance card. The turning of the century and the Art Nouveau movement marked the last artistic peak. Famous artists such as Kolo Moser and Josef Hoffmann would turn the dance cards into small pieces of art. Have a look at the dance card from Concordiaball from 1909. The cover is designed by Josef Hoffmann from the Wiener Werkstätte and there is a special newspaper inside created solely for this ball. I bought this card in three stages, it is a real collector’s item, you can find the same card exhibited at the Museum of Applied Arts in Vienna. From which countries do the dance cards in your collection come?

Dance cards were popular in the area and during the time of the Austro-Hungarian Empire. There was a huge number of balls in each capital and garrison town of the empire. Everybody organized a ball – from the ball of the Emperor (Ball bei Hof) to the ball of the silver cutlery makers. I own dance cards from countries such as Austria, Italy, Hungary, Poland and Ukraine.

Did you find any personal notes in some of your cards?

Yes, indeed. In one of them a girl had, for instance, written the following not: “The next day Mitzi’s feet hurt a lot.” I think this is very sweet 🙂

Were there any famous manufacturers of dance cards?

August Klein at Graben 20 in Vienna’s first district definitely made the most beautiful cards. He moved from Germany to Vienna and basically made it from rags to riches, he even opened dependences in Paris and London.

How did you start collecting dance cards?

It all started with 16 dance cards in a shoe box which I had inherited from my family. My wife bought a nice board on which she hung them. Eventually I started buying some more at flea markets and antique shops until I went hunting for dance cards each day after the office. Nowadays you can only rarely buy them. Last year I acquired only 5-6 new ones. Is there any dance card still missing in your collection?

With the large number of balls at that time, I estimate that I only possess dance cards from about 3% of all the balls. For its 50th anniversary in 1914, the Concordia Ball published a collection of all the dance cards from the past fifty years. I nearly own them all, except for six years. I would really love to find these six missing dance cards in order to complete this collection. 
With all this talk about dancing we were wondering which is your favorite dance?

I am always asked this question. Actually, I am not a big dancer and hardly go to any balls. If I had to choose I would rather go for the Jitterbug than any standard dance.

Do you collect anything other than dance cards?

There is actually a second area: I collect everything that has to do with crabs and lobsters, such as baking forms, pipe cleaners, and porcelain bowls in the form of crabs and lobsters. But this collection is not that big as these items need a lot of space. My grandfather, he was a big collector. He collected everything; he was a so-called universal collector, which is the true collector.

Thank you very much for the great interview!