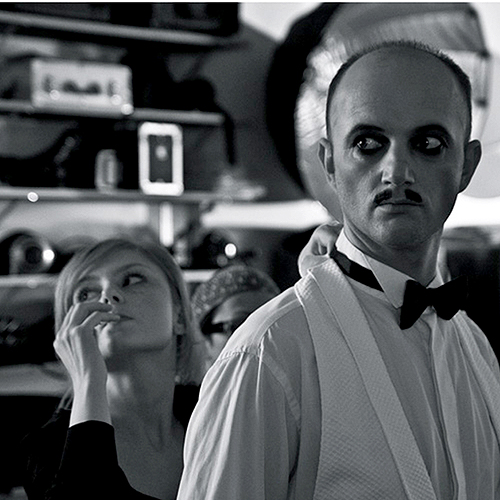 The stage is Ildi Tihanyi’s life! No, she is not an actor, she is a costume and set designer working for some of the most renowned theatre and movie productions in Hungary. She likes to create dream worlds on stage in which the audience can immerse themselves. To realize these worlds she experiments with different materials and techniques. For the costumes in two of her latest shows the designer chose a very special material: DuPont™ Tyvek®, a durable, tear resistant and extremely lightweight substrate, which combines the best properies of paper, film and fabric. We met Ildi Tihanyi and chatted with her about her job, fashion and her latest projects. Can you briefly describe yourself and what you are doing?

I work as a costume and set designer, which allows me to unfold my creative side on a wide spectrum: in films, advertisements, theatre productions, performances or even in fashion design. I, however, mainly have worked in theatres so far, where I realize the visual design of shows. This includes designing  the set and the costumes as well.

I have always been attracted by the world of theatre. I visited many shows and was fascinated by the vivacity, which is happening in front of your eyes and makes you an insider. Films are different, there the main issue is how you capture the moment, you have more control over what you let the audience see.

When did you decide that you wanted to become a costume and set designer?

I think it was the moment when I crossed the stage at Bárka Theatre in Budapest where the scenery was being built for the evening show. It was then that I realized that as a designer you have the opportunity to build your dream world and the audience will live in this universe for two or three hours during the show. What do you love about your job?

I love working with people. This is also true for filming, where you are part of a big, creative team and everyone contributes something to the whole. This only works out if the members of the team are completely on one wavelength. Good communication between the director, cameramen, art and costume designer and even the sound technicians is crucial. During the recording it is important that everybody does his job as precise as possible.

In costume design the person, whom I design the clothes for, is the most important. You can tell that you did a good job if, at the first sight, you see the person and not the costume. The costume has the task to underline the beauty and individuality of the person wearing it. In the theatre the designer lives together with the play, constantly discussing with the director, choreographer, actors, watching the rehearsals in order to create the most suitable costume for the particular role with the particular actor for the particular scene and movements. So that it serves the show its best way and the actor can work in his costume. The costume is always a uniform for the actor – this is the main aspect. What role does paper play in your work?

I graduated from Kaposvar University as Theatre Designer and then acquired my MA degree at the University of Theatre and Film Arts in Budapest in Production Design.  Additionally, I visited the textile design course of Moholy-Nagy University of Art and Design (MOME) where I learned the basics of fashion design and tailoring. We used to prepare the designs mainly from paper. It was quicker and easier that way to create the dress patterns from paper and then put them on the mannequin. This way you could immediately see whether the shape has met your imagination.  Experimentations with paper give you freedom in preparing the shape of dresses.

In February 2013 we were working on the play Amphitryon by Kleist at the National Theatre with the director Peter Gothar when we had the idea to create the costumes from paper. We had the desire to express a kind of temporality and use the playfulness of paper since nearly everything can be folded from paper. Of course it was not that easy, but we wanted to give this impression to the audience.

I experimented with several kinds of papers, tested what they could provide based on their structure and how the final look would be. Important parameters were the grammage, bulk, surface, and that the paper could be dyed. I made some research on papers used by designers before and finally found Tyvek 1443R. Tyvek is a very special paper because it is unbreakable and even washable. We experimented with different thicknesses, tested how and with which type of dye it can be colored and what you can make of it. My aim was to make these costumes unique. Most costumes were tailored and prepared by myself and even dyed by me with a special leather color. I also prepared a life-sized cock which became the crier of the show. The feedback underlined that it was worth starting this work, people appreciated and understood the world which we had created on stage.

You also designed the costumes for the operette Leányvásár by Viktor Jacobi which was staged in July at Szegedi szabadtéri Játékok, an open air festival in Southern Hungary. For the costumes you again chose Tyvek which was printed this time.

Since we already had the experience with this paper at the National Theatre we thought with Peter Gothar that using Tyvek could freshen up the world of Leányvásár as well. The characters in the show are playful – especially in the adaptation of András Vinnai, where the main conflict is that skinny people arrive to the island of fatties and these two worlds connect through one or more love stories in a humorous way. For Leányvásár I drew a colorful, cartoon-like world where the characters can be authentic and make us laugh because of their pure simplicity.

I definitely wanted to use vivid colors, but since we are talking about 200 costumes, I knew that this could not be reached by hand painting within a short time. Therefore I decided to go for graphical printing. However, this entailed another challenge: the computerized drawing of the patterns. The end result was a happy, colorful cavalcade. The colorful and cartoon-like world of Leányvásár

What inspires you for your work?

I look through many photos, and also films provide some inspiration, but it can happen that I see something on the street which gives me ideas.

Is costume and set design influenced by current fashion trends?

I generally follow actual trends, however, for me, the reinterpretation of past ages is most interesting. I love the work of Alexander McQueen and Marko Mitanovski, two contemporary designers, but it is also very interesting to study fashion drawings from the past because they tell us a lot about the worldview and lifestyle of people at that particular time.

Can you reveal some of your projects to come?

At the moment I am working on a play called The Striker by Caryl Churchill, which is a coproduction of the József Katona Theatre and the Budapest Puppet Theatre. This is a very interesting coproduction. We will combine puppet show techniques and theatre play in order to give life to this peculiar world of Anglo-Saxon mythology: In the boring, grey world of the people, life-size puppets and strange creatures come to life, which suggests a formidable parallel world living in each of us.

Dear Ms. Tihanyi, thank you very much for this interesting interview!