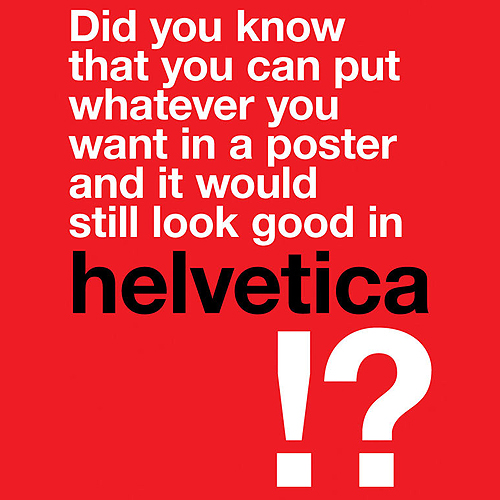 It is over fifty years old, originated from Switzerland and is the most popular and widely used font in the world. You’ve guessed it? We are talking about Helvetica! Font designers have been obsessed with it for decades, it has fanatic typography fans and it seems to never lose its appeal. We collected 20 stunning posters, all paying tribute to the typeface called Helvetica, some with very funny (but true) captions!

Helvetica is the most widely used sans-serif typeface in the world. Developed in 1957 by Swiss typeface designer Max Miedinger in collaboration with Eduard Hoffmann at the Haas’sche Schriftgiesserei (Haas Type Foundry) in Münchenstein, Switzerland. Designed as a neutral typeface with great clarity, no intricate meaning in its form with a wide variety of uses it has reached great success. 
Originally created to compete with the successful Akzidenz-Grotesk font, being named the Neue Haas Grotesk (New Haas Gotesk), it was mainly based on Schelter-Grotesk and Haas Normal Gortesk. Later on, it was slightly modified and re-named as Helvetica in order to be more internationally marketable. (For more information about its development check out our previous post The History of Typography by Ben Barrett-Forrest.)

Since the late 1980s, Helvetica is ubiquitous. In 1990, a digital version of Helvetica, Arial, was introduced and became a huge success as well. Helvetica is the most popular choice for a typeface in commercial, industrial and even in government use. Some of the largest companies, such as McDonald’s, Jeep, CNN, Target, Lufthansa, just to name a few, use it. It’s even found its way to outer space as NASA’s official typeface used on their Space Shuttles, and has its own documentary movie made out of it, Helvetica by Gary Huswitt. Not to forget its own celebratory exhibition at the MOMA in New York titled “50 Years of Helvetica” in 2008. Last but not least it is rated number one on FontShop’s “Best Fonts of All Time”.

Check out our collection of posters dedicated to the celebrated typeface. Which one is your favorite? Chasm of sar by Sam Wells 2 Helvetica in love poster by Phristopher 50 years of Helvetica by Richie Brumfield